The Korean chemical cargo ship that was hijacked last weekend was rescued at 3 p.m. yesterday Korean time, along with its 21-person crew, after a breathless five-day mission by the Korean military, the Joint Chiefs of Staff said yesterday. Eight pirates were killed and five were captured.

The captain of the ship, Seok Hae-gyun, 58, sustained a gunshot wound to the stomach, and three members of the Navy’s special forces were also wounded in the process. Their injuries are not life-threatening, said the Joint Chiefs of Staff.

“The pirates were armed with 100 rifles, machine guns and RPG-7 grenade launchers, so our special operations unit had to launch a surprise attack with tension levels at their peak. The soldiers cleared roughly 50 compartments inside the ship, following their orders given ahead of the attack,” said Lee Seong-ho of the Joint Chiefs of Staff yesterday. “The crew is currently in good condition.” The ship’s captain was immediately sent to a nearby hospital on an American helicopter.

Since 2006, nine Korean vessels have been seized by pirates in the area. This was the first time the military has tried to recapture a ship, and the first military operation in international waters by Korea. The successful rescue carries great meaning for Korean trade, as 30 percent of Korean commerce ships pass through the Gulf of Aden and the Arabian Sea. 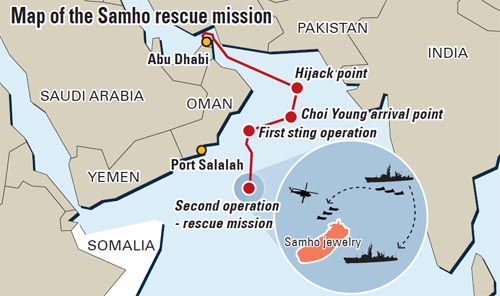 President Lee Myung-bak was quick to respond to the rescue mission, saying that the military had “perfectly executed the operation, no matter what the situation.”

“Anything that threatens the life and safety of our citizens will not be tolerated,” said Lee at the Blue House yesterday.

The Samho Jewelry was seized by Somali pirates in the Arabian Sea en route to Sri Lanka on Jan. 15. Its crew included eight Koreans, 11 Myanmar nationals and two Indonesians.

A day after the tanker’s hijacking, the 4,500-ton Navy destroyer Choi Young was dispatched to the area. The destroyer, part of the counterpiracy Cheonghae Naval Unit that operates in the Gulf of Aden, carries one anti-submarine Lynx helicopter and has 30 Navy Seals members on board along with a crew of 300.

Lee, of the Joint Chiefs, said that the operation was carried out with the help of related government bureaus, the Combined Maritime Forces and the ship’s operator, Samho Shipping. He also stated that support had been given from the U.S. military and that an Oman patrol ship had helped with Korea’s rescue mission.

On Monday evening Korean time, the Choi Young had the Samho Jewelry within sight, 450 to 500 kilometers (280 to 311 miles) south of where it was originally seized and apparently heading toward Somalia, said military sources.

After a few hours, a Mongolian cargo ship appeared 11 kilometers away, and the pirates on the Samho Jewelry attempted to add this boat to their spoils, said a source from the Joint Chiefs of Staff. Three to four pirates lowered themselves onto a small motorboat from the Samho Jewelry.

“We believe they wanted to seize this ship as well and some of [the pirates] wanted to return to land on the [Mongolian] ship,” said the Joint Chiefs source.

With the 13 pirates who took over the Samho Jewelry now separated into two groups, the military saw a chance to strike.

The Lynx helicopter attacked the four pirates on the motorboat, who were killed or disappeared into the sea, according to the military sources. A team of roughly 10 Navy Seals was dispatched on a speedboat toward the Samho Jewelry.

The pirates remaining on the Samho Jewelry started to fire at the Korean vessel heading their way. During the skirmish, three members of the special forces team were injured and the boat was forced to return to the Choi Young. “Our three wounded sailors have received emergency medical treatment,” said a military source, saying that the wounds are not life-threatening. The sailors were sent to a hospital in Oman for treatment via helicopter.

After the Mongolian ship passed unharmed, the remains of the pirates’ motorboat were scooped from the water by the Choi Young, and its crew recovered three rusty rifles, several fishermen’s knives, an ammunition magazine and three ladders of varying heights, said the military source.

Realizing that the pirates were not armed with dangerous weapons, persuasion was attempted by the Choi Young, which communicated with the Samho Jewelry pirates by radio and phone.

If the ship entered Somali waters, the operation would have ended in vain. Running out of time, the Choi Young struck once more yesterday at 9:50 a.m., killing four more pirates. Navy Seals from the Choi Young got onboard the ship to overpower the pirates. The rest of the 13 pirates surrendered, said the military source.

“After the ship was hijacked, the pirates wanted to take the [Samho Jewelry] into Somali waters as soon as possible, but the captain prolonged their travel time by steering the ship in a zigzag line. He also provided tips [to the Choi Young] through the joint communication network on the ship. We believe that he was shot when our special operations team embarked on their mission,” said Lee, who added that the captain would be fine, despite his through-and-through gunshot wound.

The military and government are still in discussions over the fate of the five captured pirates.