Seoul is firm in throwing down Samho gauntlet

Seoul is firm in throwing down Samho gauntlet 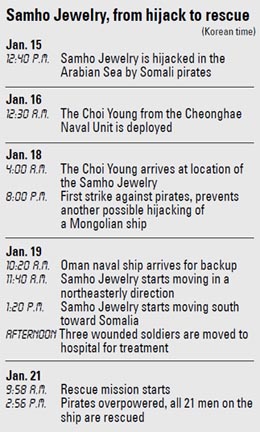 “It would be troubling to give the pirates money so easily. They must realize that South Korea isn’t so soft.”

Minister of Foreign Affairs and Trade Kim Sung-hwan was in a meeting with reporters on Thursday, answering questions on several current events, including the hijacking of the Samho Jewelry by Somali pirates. It was during this time that the Choi Young, the destroyer from the anti-piracy fleet that Korea has been operating near Somalia, was hot on the heels of the Samho Jewelry. The two vessels had been engaged in a tussle the day before when the captain of the Samho Jewelry had managed to stop the ship for a few hours. However, after the surprise military operation that left four pirates dead and three Korean soldiers injured, the Samho Jewelry started heading full speed toward Somali waters. The South Korean government wasn’t waiting on the sidelines this time to watch the pirates get away with the cash, unlike when the Samho Dream was released in November with a record-breaking ransom of $9.5 million. The memory was too fresh.

The decision to go with a military strike was made by the Korean military with the approval of the president, according to a high-ranking source at the Blue House. “Make good judgments. And do your best,” said President Lee Myung-bak after he had been given reports from his aides that a successful attack would be possible, according to a high-ranking Blue House source. “The presidential office thought that the situation in which our ships are continuously being dragged off in hijackings should be stopped,” the source said. “The Blue House aides made many suggestions to the president to root out this problem completely. This willingness from the Blue House probably had an effect on the military’s decision.”

The Samho Jewelry is the ninth Korean ship seized by Somali pirates; the first was in 2006. Previous hijackings ended with cash being paid directly to the pirates, a practice, which, over time, turned Korean ships in the Indian Ocean into potential get-rich-quick prizes. Experts have observed that in previous cases the government and military were cautious over a public backlash if a military attack failed, resulting in military casualties or, even worse, soldiers being captured.

Now that has changed. The stakes are higher because of the ransom paid out last year. There has already been criticism from the public, with many questioning Korean naval operations in the Gulf of Aden, and has helped spur the military into action.

This new move may bolster Korea’s international stature by showing that it is has the operational power to act on its own, although the size of Korea’s navy is small when compared to other countries that are contributing to anti-piracy activities.

Taking a more aggressive step against the pirates might ensure the safe passage of Korean vessels and show that Korea does not tolerate negotiating with terrorists. The military has been firm in its decision, recognizing that there may be losses along the way. “A complete mission would be one that ends without sacrifice, but in operations there may be times when partial sacrifices must be taken into account,” said a high-ranking Defense Ministry official after the Samho Jewelry was seized.