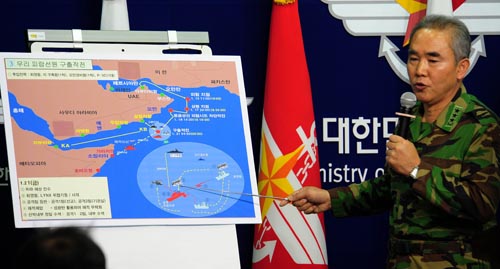 Lt. Gen. Lee Seong-ho of the Joint Chiefs of Staff gives a briefing about the rescue operation yesterday at the Defense Ministry in Yongsan, Seoul. [NEWSIS]


The families of the crew members of the Samho Jewelry, which was hijacked by Somali pirates, gave a sigh of relief at the news that their fathers, husbands and sons were safely rescued yesterday.

The ship’s captain, Seok Bae-gyun, 58, is said to be the only one who suffered a gunshot wound during the raid. “My heart stopped when the news of all members being rescued was broadcast,” said Seok Hyun-wook, 36, a son of the captain, in a trembling voice. “I wasn’t aware of the fact that the Korean Navy went out to rescue. If I knew that they were planning a rescue, I would have been nervous all along,” he added.

The son, Hyun-wook, who works in Seoul, said that his family “has been only praying for his safe return all along,” and that he is still worried about his father’s condition - he had been shot in the stomach - because he has received no details. The doors were shut tight and no one answered phone calls at the captain’s house in Geumjeong, Busan.

Kim Doo-chan, 61, who was the medical doctor onboard the Samho Jewelry, was also rescued safely with no wounds. “I’ve been worried sick about my father. Thank God he is safe,” Kim’s son, Dong-min, 28, said. “My father has been sailing for a long time, but never encountered such an incident,” continued Dong-min with his hand over his chest. “We just believed in the company and the government to do something and bring my father back. And they really did and I’m so thankful,” he added.

The family of crew member Choi Jin-kyung, 25, were delighted at the news of the rescue and said they now only hope to see him arrive safely in Korea. His father, Choi Young-soo, 52, who resides in Hwasun, South Jeolla, said, “We were in tears when we saw the news. My son just graduated from Mokpo National Maritime University, and it has been only five months since he started sailing. So when I heard the news of the hijack, I thought the sky was falling,” he said.

Choi added, “We will go to Busan as soon as we receive a phone call from the company notifying us of their arrival.” Choi’s mother, Kim Mi-seon, 50, who was at home praying with two daughters, said that she was “waiting for a phone call all day long to hear the news of my son.”

Yoon Seung-joon, 28, son-in-law of the ship’s chief engineer, Jeong Man-ki, 58, said, “My wife was under a lot of shock after hearing that her father’s ship was captive, but I’m relieved to hear the good news,” adding, “I thank all the people who have helped in the rescue.”

Among the 21 rescued seamen of the Korean-operated cargo ship, eight are Korean. “Fortunately everyone is rescued. We thank the government and the public for the rescue and support,” a Samho Shipping official said.