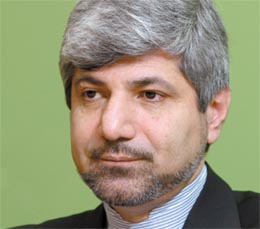 In an exclusive interview with the JoongAng Ilbo on Friday at the Iranian Embassy in Seoul, Mehmanparast stressed that Bank Mellat’s Seoul office ran its business “under the supervision of South Korean financial authorities.”

Iran’s new ambassador to South Korea, Ahmad Masoumifar, sat in on the interview.

Mehmanparast was in Seoul with seven Iranian journalists to improve relations with the Korean Ministry of Foreign Affairs and Trade.

The South Korean government in September slapped tough sanctions on Iran for its nuclear program, with penalties including the suspension of virtually all financial activities at the Seoul branch of Iran’s Bank Mellat.

A. I think there’s someone behind the allegations in regard to Wikileaks’ information on Iran. Bank Mellat operates abiding South Korean law. There’s nothing wrong with the bank. We do maintain diplomatic ties with the North Korean government. But Iran doesn’t damage (diplomatic) relations with one country for the sake of relations with another country.

What about allegations that Iran and North Korea are cooperating on nuclear technology?

Iran and North Korea aren’t in a military alliance. Frankly speaking, when it comes to nuclear weapons, Iran doesn’t need other countries’ assistance.

Iran’s young scientists are in the process of successfully developing technology to use nuclear power in a peaceful manner.

It was heartbreaking when I heard the news about the Yeonpyeong attack. I hope peace is maintained in Asia. I want to again stress peace through dialogue.

Iran is an oil rich country. Why does it need nuclear power?

The Western media also questions why Iran needs nuclear power. But when you look at the world’s latest economic trends, nuclear power is (increasingly important) when used in a peaceful way. Even the United Arab Emirates began nuclear cooperation with the South Korean government.

Crude oil will be depleted in the future. Nuclear power is an answer to that, and it’s necessary for environmental reasons, too.

Former Iranian Ambassador to Korea Mohammad Reza Bakhtiari said in a previous interview with our paper that Iran won’t sit back and watch if the South Korean government joins international sanctions against Iran.

That’s an uncomfortable question to answer. South Korea and Iran have lots in common as Asian nations. I hope for South Korean companies’ prosperity in Iran and I also hope for the success of Iranian companies in South Korea.