How Korea and Denmark can help each other go green

How Korea and Denmark can help each other go green 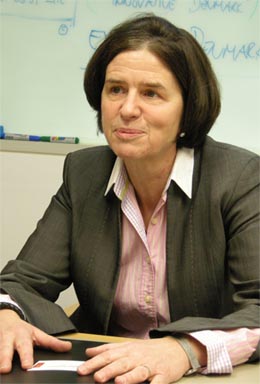 Korea and Denmark can work together on green growth initiatives, said Katherine Richardson - chair of the Danish Commission on Climate Change Policy and the vice dean for public outreach, faculty of science, at the University of Copenhagen - and the Danish government is hoping to partner with Korea to build green energy systems.

Richardson visited Korea Jan. 17-22 to talk to Korean researchers, government officials and students who are interested in green growth about the Danish government’s plan to be independent of fossil fuels by 2050.

“Denmark has a very modern and efficient infrastructure that covers the whole country, and good ideas and plans in energy efficiency,” she said in an interview with the Korea JoongAng Daily at the Danish Embassy in Seoul on Friday. “On the other hand, Korea has amazing technologies and innovations in renewable green energy technology and I think those things can be put together well.”

Richardson said she had delivered a speech at the Korea Advanced Institute of Science and Technology (Kaist) in Daejeon, and was impressed by her talks with the Korean professors and students about green technology.

“I saw some of the projects there, and the electric bus project is really amazing,” she said. “Normal buses can’t run on electricity because the batteries would be too heavy, but the electric buses recharge their batteries every time they stop at bus stops to pick up people, where there are underground electricity chargers. The idea was invented by Kaist.”

“We don’t have car companies in Denmark, so we can’t manufacture electric cars but Korea has the technology to make them,” she said. “I think Korea and Denmark could, instead of competing with each other, develop a strategic partnership [on green technology].”

Richardson leads the Danish Commission on Climate Change Policy, which the government established in 2008 to reduce fossil fuel dependence and develop green energy systems in Denmark over the next 40 years.

“We reported on Sept. 28, 2010, that it is possible for Denmark to become independent from fossil fuels by 2050,” she said. “More importantly, we showed that it wouldn’t be any more expensive than continuing to burn fossil fuels because fossil fuel prices are going to increase as demand increases. Even the price of coal increased 25 percent on the global market last year because of the increase in demand from China.”

Richardson said the commission also analyzed the cost of the transition from fossil fuels to green energy, and although the cost of building the infrastructure will be high, it will decrease in the future because green energy is unlimited.

“Although using green energy is more expensive today, it is going to be less expensive in the future, because it’s unlimited and the technology [to launch green energy systems] will make it cheaper,” she said. “We expect that if you go with green energy, the total cost of using it will be less than 0.5 percent of GNP in 2050.”

The Danish commission’s move to cooperate with Korea came after the 16th annual United Nations Climate Change Conference, which took place from Nov. 29 to Dec. 10, 2010, in Cancun, Mexico.

At the conference, the Danish government said it will invest about $5 million annually in the Korean government’s Global Green Growth Institute for the next three years and establish a local branch of the GGGI in Copenhagen.