Last week, the allies announced a cease-fire line as delays continued to plague the armistice talks. 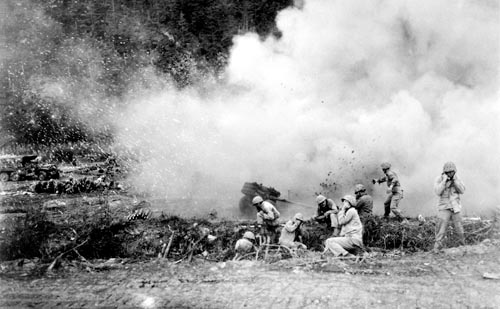 With the armistice talks in Kaesong, North Hwanghae, not making any progress, the ROK-U.S. forces decided to put pressure on North Korean and Chinese forces. In this 1951 photo, U.S. Marines shell Chinese troops. Provided by the U.S. National Archives and Records Administration


We were not making any progress at the armistice talks in Kaesong, North Hwanghae, and with the communists continuing to stall the process using various tactics, the U.S. commanders and I agreed there was only one option left for us to pursue: put heavy pressure on the enemy troops stationed on the front lines.

In an effort to pressure the communists, the United Nations troops had already started to increase their attacks in the area of Yangu, Gangwon starting on Aug. 18, 1951. With the armistice talks stalling yet again, I received a call on Aug. 24 from Gen. James Van Fleet, the commanding general of the U.S. 8th Army. I had just returned to the Peace Camp in Munsan, Gyeonggi, from another round of armistice talks.

General Van Fleet stated over the phone that he needed me to go with him to visit my ROK 1st Corps. I immediately began to wonder if the ROK 1st Corps had been performing poorly on the front lines.

I went to see General Van Fleet at his office in central Seoul and sure enough, he explained that the ROK 1st Corps was having trouble tending to its responsibilities. He wanted me to accompany him on his visit to the ROK 1st Corps to analyze the situation first before coming up with a solution to the problem together.

We were targeting Yangu, Gangwon, a strategic area of the eastern front that was included in an area referred to as the Iron Triangle, which was the central area south of Chorwon and Kumhwa, Kangwon Province. If we managed to seize Yangu, we would gain an upper hand in strategic planning on the eastern front. It was General Van Fleet’s idea to seize Yangu in order to pressure the communists at the armistice talks. With the loss of a key strategic point, the North Korean and Chinese commanders would have no other choice but to take the armistice talks seriously.

It wasn’t an easy task. The enemy had already stationed six of its divisions in the area, covering all the key points. The ROK troops, using Hyangrobong as its central location, began their attack from east to west on Aug. 18. The U.S. 10th Corps was also attacking the enemy in the Yangu area from the south at the same time.

General Jang had been commanding the ROK 1st Corps in my place while I was away at the armistice talks in Kaesong. The ROK 11th Division was situated to the left of the 1st Corps and the ROK Capital Division was located to the right as the ROK troops began to apply pressure on the enemy troops along the eastern front.

Despite lacking combat experience, Gen. Song Yo-chan and his ROK Capital Division successfully seized Hill 924 and thwarted the ensuing enemy counter-attacks. The problem was with the ROK 11th Division, which seized Hill 884 a total of three times but had trouble defending the area and continued to give up the area to enemy troops. 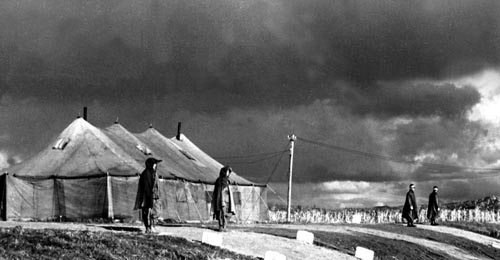 The armistice talks were held at Naebongjang in Kaesong, North Hwanghae, for the first three months before relocating to Panmunjom. Provided by the U.S. National Archives and Records Administration


The ROK 11th Division was engaged in a fierce battle against enemy troops along the Nam River. The area had tough mountainous terrain, and the strong winds and heavy rainfall that summer resulted in treacherous conditions for battle. This made it difficult for us to concentrate our men and firepower in one targeted area.

Despite a bout of poor weather that included heavy rainfall, the skies cleared in the days leading up to the attack and the six 155mm artillery guns were put to use immediately. Aircraft carrier-based bombers from the East Sea provided air support. With a barrage of shelling, and timely air support, the battle did not last very long and we were able to seize all the strategic hills surrounding Yangu.

As a result, General Van Fleet asked Gen. Matthew Ridgway, the supreme commander of allied forces in Korea, to return me to my duties as a front line commander with the ROK 1st Corps. Gen. Lee Hyung-geun was selected to replace me as the ROK representative at the armistice talks.
As the weather started to cool, indicating the start of the fall season, I resumed my duties as the commander of the ROK 1st Corps and never again set foot in another armistice meeting. It was my second autumn since the outbreak of the Korean War on June 25, 1950. The fall of 1950 was not a particularly memorable one as we had to deal with a wave of Chinese People’s Liberation Army soldiers who had just entered the war to prevent the ROK and United Nation troops who were advancing north.

What I realized from our experience the previous fall was that we did not pressure our enemy when we had the chance. The situation was not much different in the fall of 1951. Despite having strong U.S. air and sea support, the allied forces did not pressure the enemy and the long breaks gave the enemy troops plenty of time to recover.

In July of 1951, when the armistice talks started, the PLA had failed in its efforts to penetrate the ROK-U.S. defensive line along the east and their troops and supplies were depleted. The lengthy armistice talks that started in July provided them with two to three months of time to recuperate and recover from the damage and prepare to attempt another attack on our front lines. In contrast to the larger battles of the past, the small battles in the numerous hills of Gangwon happened frequently.

It was around mid-November when I received a call from Lee Jong-chan, the ROK Army chief of staff, telling me to meet him in Seoul the very next day. I was to go to General Van Fleet’s office in central Seoul. Upon arrival, I was caught off guard when the group began discussing ways to root out the North Koreans on Mount Jiri, located in the southern part of the Korean Peninsula. We faced a serious situation at the time. The North Korean troops who had failed to retreat with their respective units and remained in the South had linked up with existing partisan troops. We had a serious problem because the partisan troops were equivalent to another sizeable force of North Korean troops in South Korean territory. To make matters worse, we would have to engage in guerilla warfare. General Van Fleet explained that since I had experience with guerilla warfare, I was best suited to lead the mission.
I was told that a total of two divisions would participate and it would be up to me to select the divisions. I knew from the start that the attempt to drive out the North Korean partisans on Mount Jiri would be tricky. They were great at disguising their true identity and, with elements within the ROK Army tipping them off, they easily escaped our advance.