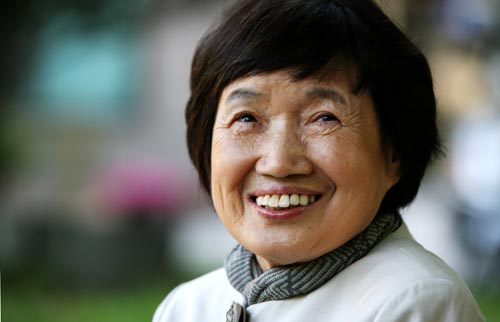 Park Wan-suh, one of Korea’s best-known female novelists and essayists, who influenced modern Korean literature with her tales of post-Korean War life, died of gallbladder cancer on Saturday.

According to her family, Park had surgery for gallbladder cancer in September and was treated with chemotherapy. On Friday, she had trouble breathing and was brought to an emergency room but died the next day. She was 80.

Born in October 1931 in Gaepung, Gyeonggi, in what is now North Hwanghae Province in North Korea, Park moved to Seoul in 1934 and discovered her interest in literature at Sookmyung Girls’ High School.

Park entered Seoul National University’s Korean literature department in 1950 but was forced to quit her studies following the outbreak of the Korean War (1950-1953).

Park emerged on the Korean literacy scene in 1970 at the age of 40, and as mother of five children, when her first novel, “The Naked Tree,” won a competition sponsored by the local women’s magazine DongA Woman.

Though her literary debut was relatively late, Park’s stories quickly gained popularity among readers as she delved into the post-Korean War realities of everyday people.

Her works portrayed the often altered and bumpy existences of ordinary families and women following the war.

According to the Korea Literature Translation Institute, “Who Ate Up All the Shinga?” and “Mom’s Stake” have been translated into nine languages, including English, French, German, Spanish, Chinese and Japanese.

Park also portrayed the life of a woman merchant at the turn of the century in the historical novel “Illusions” (1990), which won her the Korean National Literature Award in 1990.

“Illusions” was filmed as a drama serial and aired from October 1996 to May 1997 with veteran actor Choi Bul-am and actress Chai Si-ra as the main stars.

“I feel like an axis of Korean literature has shattered,” said poet Jang Seok-ju. “Her loss is very tragic.”