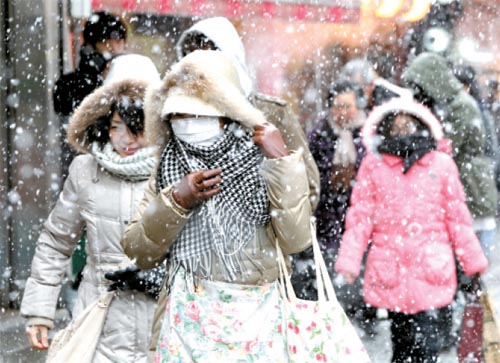 
A pleasant Sunday morning turned into a blizzard when snowstorms hit the Korean Peninsula yesterday, jamming highways and dusting streets and buildings.

The heavy snow forced police and government authorities, including those in the Seoul Metropolitan Government, to mobilize 10,000 officials in Seoul to remove snow from roads and sidewalks to prevent accidents.

According to the state-run weather agency, Seoul had 5.2 centimeters (2 inches) of snow as of 4 p.m. yesterday. Suwon, Gyeonggi had 6.1 centimeters of snow and Cherwon, Gangwon had 5.7 centimeters. Munsan, which is located in Paju, Gyeonggi, near the inter-Korean border, had 7.6 centimeters.

There were also reports of minor traffic accidents.

A 22-year-old woman surnamed Lee sustained injuries when the bus was on skidded off a snow-covered two-lane road in Geumsan, a village in Paju, and plunged two meters (6.56 feet) into a field. She was taken to a hospital for treatment, according to police.

In particular, a 5 kilometer (3.1 miles) stretch of the Gyeongbu Expressway from Anseong to Seoul and a 3 kilometer stretch linking Osan and Dongtan suffered major traffic jams.

The Korea Expressway Corporation originally forecast 300,000 cars would be returning to Seoul by midnight, the normal figure for a Sunday. But reports of snowfall prompted people to hasten their departures to Seoul, causing jams.

The snow was predicted to stop last night in most areas, including Seoul and Gyeonggi, according to the Korea Meteorological Administration.