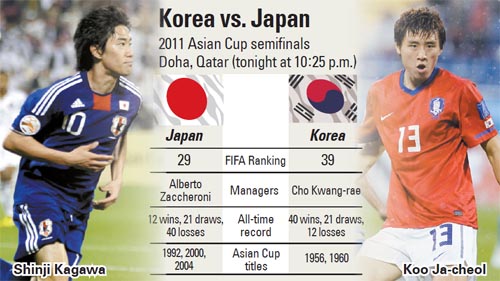 The long-standing rivalry between Korea and Japan will be renewed in the 2011 Asian Cup semifinals tonight at 10:25 p.m., Korea time.

With both teams featuring strong midfielders and versatile forwards, defense will likely make or break the crucial match for both Japan and Korea.

The key for Japan will be to hold a surging Koo Ja-cheol, while Korea will try to contain the dynamic Shinji Kagawa.

Jeju United’s Koo has emerged as a rising star capable of leading the national football team’s attack, while Kagawa of Borussia Dortmund has emerged as the new ace for the Japanese national team.

Koo, captain of the U-23 national team at the 2010 Guangzhou Asian Games, was thrust into the role of secondary forward to replace the injured Park Chu-young and has flourished in his new role at the Asian Cup. 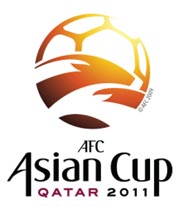 The 21-year-old midfielder has scored four goals in three group-stage matches and has been a key contributor on Korea’s offense.

“Japanese media and football fans have taken notice of Koo as a player capable of following in Park Ji-sung’s footsteps and leading the Korean national football team in the future,” said Satoshi Ushio, a senior sportswriter for the Asahi Shimbun in Japan.

Kagawa, also 21, was a sensation in the German Bundesliga last year by scoring eight goals in 17 league matches.

But Kagawa took his time to perform up to his capabilities in Qatar. According to the Japanese news reports, Kagawa reported to training camp out of shape and looked sluggish throughout the group stage.

Despite his slow start, Kagawa scored two goals to help lead Japan to a dramatic 3-2 come-from-behind win over home-team Qatar in the quarterfinals on Friday night.

Keisuke Honda emerged as the star of the Japanese national team at the South Africa World Cup last year, but he has struggled in his new role on the right wing. Japanese national team manager Alberto Zaccheroni decided to give the number 10 jersey - usually reserved for the ace of the squad - to Kagawa over the struggling Honda.

“I noticed he had solid fundamentals,” Koo said about Kagawa. “The fact that he scored eight goals in 17 matches in his German Bundesliga rookie campaign speaks for itself.” 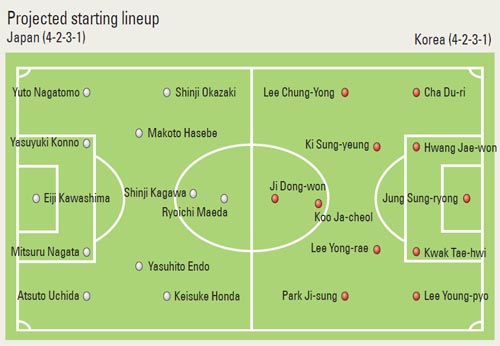 Said Kagawa of Koo: “Koo is a mentally strong player with a good skill set. I want to prove that the new generation of Japanese players is stronger than Korea’s.”

Both Korea and Japan will be without key defenders.

Starting center defender Lee Jung-soo is not available for the upcoming semifinal match because he collected his second yellow card of the tournament in the quarterfinal against Iran on Monday.

With veteran Lee Yong-pyo and Cha Du-ri flanking the fullback positions, Cho is expected to replace Lee with Kwak Tae-hwi, a physical veteran defender capable of scoring in set-piece plays.

But Kwak has been shaky at times on defense, conceding penalty kicks to Bahrain and India.

Japan will also have to replace its own starting center defender.

Maya Yoshida was ejected from the quarterfinal match against Qatar after collecting two yellow cards and is unavailable for the game against Korea. It’s a big loss for a Japanese defensive unit already missing veterans Marcus Tulio Tanaka and Yuji Nakazawa due to injury.

FIFA ranks Korea 39th in the world and Japan 29th. However, Korea holds a lopsided lead in head-to-head matches with 40 wins, 21 ties and 12 losses.

In fact, the last time Korea lost to Japan was at the 2005 East Asian Football Championship in Daegu when they fell 1-0.

Korea is undefeated in the five following matches since the game in Daegu, with a record of two wins and three draws.