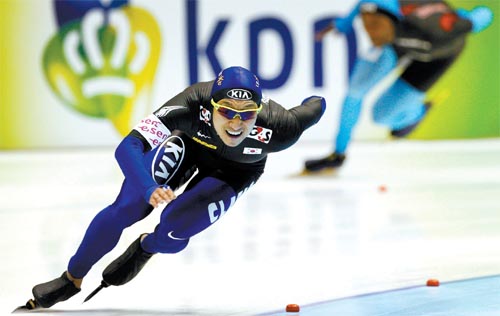 Lee Kyou-hyuk competes against Shani Davis of the U.S. in the men’s 1,000-meter during the World Sprint Speed Skating Championships in Heerenveen, the Netherlands, on Jan. 23. [REUTERS/YONHAP]


Veteran speed skater Lee Kyou-hyuk got off to a fine start to the 2011 season by placing first overall at the World Sprint Speed Skating Championships at the Thialf arena in Heerenveen, the Netherlands, yesterday. Mo Tae-bum and Shani Davis of the United States placed second and third, respectively.

Up against world-class skaters Mo, Davis and Tucker Fredricks, the 33-year-old placed first in the 500-meter race with the time of 34.92 seconds and came in fourth in the 1,000-meter event on the first day of competition on Sunday. On the following day, Lee placed first again in the 500-meter race with a time of 34.92 seconds and came sixth in the 1,000-meter.

At the World Sprint Speed Skating Championships, skaters compete in the 500-meter and 1,000-meter long-track competitions twice and are ranked based on their combined totals.

Having achieved his goal of placing first at the world championship, Lee will now turn his focus to the 2011 Asian Winter Games in Kazakhstan, which is set to kickoff on Jan. 30. Lee will compete in the 1,500-meter speed skating event. Though, while Lee is a 500-meter and 1,000-meter specialist, the Winter Asiad organizers have decided to exclude the 1,000-meter event, which has traditionally been dominated by Korean skaters.

“I expect some of the younger skaters like Mo, Lee Sang-hwa, Lee Kang-seok and Lee Seung-hoon to do well at the Asian Winter Games,” said Lee. “But I will look to win the 1,500-meter event.”

The latest title is the fourth in Lee’s accomplished career. Lee won the World Sprint Speed Skating Championships in 2007, 2008 and 2010. Despite his dominance at the world championships and having competed at five consecutive Winter Olympics, Lee has yet to win a gold medal. Lee was a favorite to win the gold in the 500-meter event at the 2010 Vancouver Winter Games but struggled to a 15th place finish while Mo surprised everyone by winning the gold.

“It’s strange, but I feel much more comfortable at the world championships,” Lee said in an interview with the JoongAng Ilbo after the race.

Lee Sang-hwa, a gold medalist in the 500-meter race in Vancouver and at last year’s world championships, did not compete at this year’s event.

Christine Nesbitt of Canada won the gold while Jenny Wolf of Germany and Annette Gerritsen of the Netherlands placed second and third, respectively.