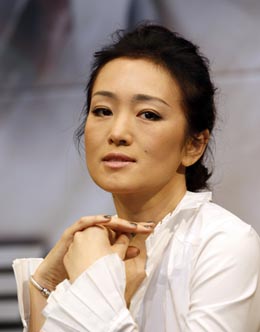 Gong, 45, who is one of the most sought-after Asian film stars in Hollywood, held a press conference at the Shilla Hotel in Jangchung-dong, central Seoul, yesterday morning.

The film stars John Cusack, Chow Yun-fat and Ken Watanabe, and is set in Shanghai in 1941, 60 days before the attack on Pearl Harbor.

It tells the story of a man who travels to Shanghai to investigate the death of his friend and discovers a larger secret in the process.

Gong, who plays Anna Tan-ting, a Chinese resistance fighter, expressed her affection for her role in the movie.

“The screenwriter devoted nine years to writing this story,” Gong said. “The film is very realistic.”

When asked about her career and the choices she has made, the actress said she has no regrets.

“Throughout my career, I’ve tried to choose work that I care about,” she said. “All of the work I’ve done has been my choice and I haven’t done anything that I haven’t wanted to.”