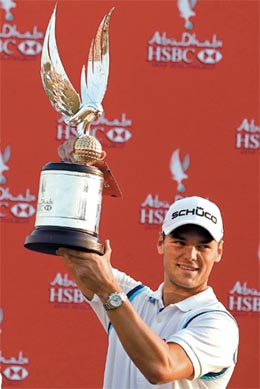 ABU DHABI, U.A.E. - Martin Kaymer overtook Tiger Woods for the No. 2 ranking in the world on Sunday, winning the Abu Dhabi Golf Championship by eight shots after shooting a 6-under 66.

Kaymer held a five-shot lead going into the day and had no problem securing his third win in four years in Abu Dhabi. Rory McIlroy of Northern Ireland finished second, while Retief Goosen and Graeme McDowell were another two shots back in third.

It was the biggest winning margin and lowest total score in the history of the tournament.

Kaymer had been third in the rankings and now trails only Lee Westwood.

“It’s quite nice to overtake somebody who is probably the best player in the world, perhaps the best player that ever lived,” Kaymer said. “To be in front of him for a little bit - we’ll see how long it takes him to overtake me again - but you know, it makes me very proud.”

It was Kaymer’s 100th start on the European Tour, and the ninth win of his career.

Goosen had a 64, the best round of the day, while McDowell closed with a 67. Phil Mickelson finished 37th, meaning McDowell will move ahead of the reigning Masters champion at No. 4 in the rankings. Both started the week tied for fourth place.

Mickelson closed with a 70, and said he was not bothered by slipping to fifth in the rankings.

Kaymer started his round with birdies on the second and third holes, and had extended his lead over McIlroy to seven shots by the turn.

“I am very happy, especially with the way I played golf today,” Kaymer said. “The most important thing for me was today that I had fun. If I have fun, then I play good golf. I played with Rory and we definitely had a lot of fun on the golf course. He struggled a little bit on the first nine. After nine holes, I think I was leading by seven shots and then I pretty much knew if I just keep playing the way I do, I’m probably going to win.”

McIlroy said he quickly gave up thoughts of challenging Kaymer, and played most of the round trying to stave off those behind him.

“After the first couple of holes today, I was just trying to consolidate second place, that’s all you’re really playing for,” McIlroy said.