Courage under fire, plus fear and tears

Courage under fire, plus fear and tears 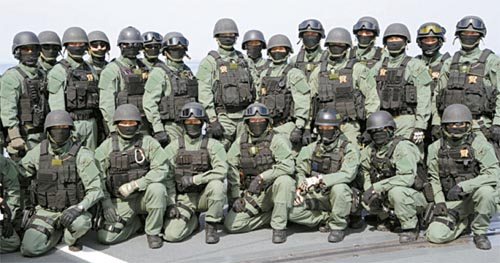 Members of the Underwater Demolition Team and commandos of the Navy Seal unit took a group photo on Friday after they completed the rescue of the Samho Jewelry, which was hijacked by Somalian pirates for seven days in the Arabian Sea. The Navy released the photo to the local media yesterday. [NEWSIS]


The Defense Ministry yesterday released vivid testimonials by members of the Underwater Demolition Team and commandos of the Navy Seal unit dispatched to rescue the 21 crewmembers of the Samho Jewelry held by Somalian pirates for seven days in the Arabian Sea.

Although three members of the special forces team were injured in the first skirmish with the pirates on Jan. 18, the ministry said those casualties ignited the fighting spirit of the other members of the teams on the 4,500-ton Navy destroyer Choi Young as they waited for the final assault on the pirates last Friday.

In releasing the testimonials, the ministry said it wasn’t disclosing the full-names of certain commandos because they may be dispatched on future operations.


“It was 3 a.m. on Jan. 21. My eyes opened at the wake-up call order,” Lieutenant Kim Kyu-hwan wrote. “I spotted a broken pair of tactical goggles worn by a senior commando who was injured during the first attack three days ago, and that woke me up completely. Me and my colleagues exchanged jokes and people asked whether others slept well, although everyone knew that no one slept very deeply. I felt grateful that I was with my colleagues on this historic day.”

A commando surnamed Kang, who flew the Lynx helicopter that carried the three injured special team officers back to the Choi Young for treatment on Jan. 18, wrote that he was happy that he was able to keep a promise he made to the injured colleagues.

“On the way back to the Choi Young carrying my injured fellow officers, I promised them I would make sure the Somali pirates would never set foot back in Somalia,” Kang wrote. “I’m proud that I’ve kept the promise.”


A sniper surnamed Park witnessed the final assault from a perch atop the Choi Young.

“I was keeping a close eye on potential threats from the Somali pirates by hiding at the top of the mast of the Choi Young, the highest place on the destroyer,” Park wrote. “The operation began and I suddenly spotted one of the pirates aiming his RPG-7 antitank grenade launcher at the Choi Young. I shot and incapacitated him, and stopped his attempt at an attack. If one rocket hit us, we could have suffered serious damage. When the attack team neared the Samho Jewelry, I carefully watched the stern, bridge and middle deck of the ship and fired shots to provide cover to the commandos. The attack team went up to the Samho Jewelry and successfully occupied the bridge of the ship. I can remember vividly the scenes that I aimed at during the operation.”


Another commando surnamed Kim recalled the horrific sight of his fellow soldiers bleeding after the first skirmish with the Somali pirates on Jan. 18.

“We decided to attack when the pirates tried to hijack a Mongolian vessel on the afternoon of Jan. 18,” Kim wrote. “Fear overcame me during the five minutes when we were heading to the Samho Jewelry on high-speed rubber boats. My colleagues covered my face with a bandana so I could somehow conquer my fear. I forced my eyes wide open.

“Pirates fired shots at us,” Kim continued, “and my colleagues on another boat beside us were bleeding. Three commandos were injured. I felt like my head was empty and blank. I had a hard time suppressing my temper because it was my first time witnessing fellow soldiers injured during a gunfight. Everybody lost their words.”

Kim also described the victory of the Jan. 21 attack. “High-speed boats behind the Choi Young were nearing the Samho Jewelry for 20 minutes,” Kim wrote. “A Lynx helicopter directed its red beam of light on the Samho Jewelry and the Choi Young began firing at the vessel. We entered at the stern of the vessel and subdued the pirates. I saw the Samho crew with their heads down in fear. The crew finally grabbed the commandos’ hands tightly in relief and said thank you to us. That warmed my heart.”