Artists mine the urban landscape, layer by layer

Artists mine the urban landscape, layer by layer


On most days, Jongno 5-ga Station in central Seoul is far from a captivating destination.

As one of the oldest subway stations in the city, it is unkempt and crowded with Seoulites trying to escape the area and get safely home.

Through photographer Koo Sung-soo’s eyes, however, Jongno 5-ga’s tunnel is a vision of architectural symmetry. The two straight subway tracks in the center of the photo clash beautifully with the tunnel’s circular shape. The shadows of the metallic gray poles and pipes emphasize the bright lights flashing from the sides of the tunnel, where the starkly contrasting qualities of the photograph create an eerie otherworldliness.

“The photograph puts a spotlight on things that we normally take for granted and oftentimes ignore in everyday life,” said Lee Sang-jeong, the managing director of Park Ryu Sook Gallery in Cheongdam-dong, southern Seoul. The gallery is currently holding an exhibition titled “Urban Landscape” that includes the work by Koo and six other artists.

Koo’s photograph, titled “Jongno 5-ga Subway Tunnel,” which is a part of his “Magical Reality” series, is one of the 23 photographic works that are part of the exhibition.

All the works in the exhibition depict the polarities that are often present in big cities and how we relate to these opposing sides, whether they be nature and concrete, day and night, darkness and light or the familiar and peculiar.

“The chaos and noise of big cities often bring out antagonistic sides in all of us,” said Lee. “We often fail to communicate with the spaces in which we exist - in the streets and buildings we so often just pass by without looking - but they contain the history of how we once lived.” 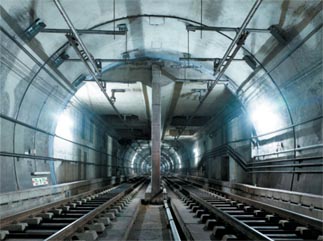 Another artist in the exhibition, Ryu Jung-min, creates an alien space that also includes hints of the familiar. In his work, “The Path of Error #1,” a row of European-style walk-ups stands at the top of the photo, while a pedestrian road below is replicated and stacked on top of each other over and over again. Ryu creates a mazelike space in which elements of modern day cities come together like an architectural puzzle by overlapping hundreds or thousands of copies of the same photo using a technique called photomontage.

In a similar way, photographer Park Sang-ho creates new, virtual spaces in his works by putting together different images into a single conceptual photograph. In his “B.D. - Busan #2,” individual photographs of houses and buildings in Busan are reorganized into one photograph that almost looks like a painting. The similarly-shaped houses with colorful roofs look like an artificial town from a cartoon or comic book. Collectively, the real-life houses look familiar yet foreign, perhaps just as modern-day urbanites feel about their own cities.