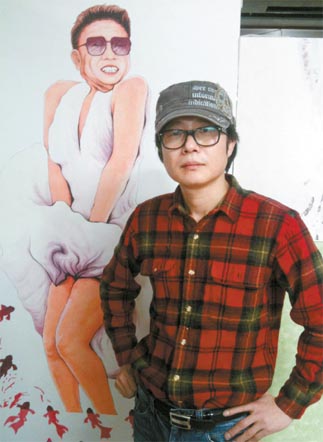 Artist Song Byeok says this painting symbolizes ordinary people struggling to escape the repressive regime in Pyongyang. He defected from the North in 2002. [YONHAP]

Posing in front of one of his anti-North Korea paintings - this one depicting Dear Leader Kim Jong-il’s head atop the provocative body of Marilyn Monroe - North Korean defector Song Byeok believes he is finally free from the communist brainwashing that has eaten into his soul.

Song, 42, who escaped North Korea in 2002, had moments ago waved his hand and slipped away in refusal when he was asked to be photographed against the life-size painting that he said carried a message for the North Korean despot: open or be opened.

The fear of denigrating the Dear Leader - for whom the former North Korean propaganda painter had worked as part of an elaborate cult of personality - had briefly struck him.

But after gazing for a moment at the chimerical painting that he takes a special liking to, Song strode back to it and said with a nod, “Why not?”

“For a long time, I honestly believed Kim was a great leader and that my country was better off than others,” Song said in an interview in his workroom, which was little more than a cubicle inside a tiny run-down shopping mall on the outskirts of Seoul.

Song, a native of Hwanghae Province in the North’s western coastal region, said he began to realize he was living a brutal life when he tried unsuccessfully in 2000 to cross the border into China with his father to seek economic help from their relatives in China.

Deepening food shortages had led to the suspension of rations for his family, even though he had worked as a propaganda painter for a local communist party bureau for seven years.

“The crossing cost me my father,” Song said tearfully, recalling his father who waved his screaming son away even as he was swept away alone by the currents. “We underestimated the rains that swelled the river.”

Desperate for help, Song ran to the border guards on patrol, only to be beaten unconsciously and confined for months.

“I remember them saying, ‘Why didn’t you just drown with your father?’ I was then locked up for attempting to defect. That was the breaking point. I decided to leave the country for good,” said Song, who lost a finger while in prison due to injuries he had suffered earlier.

Following his defection to South Korea, he exchanged dozens of letters with his sister in North Korea via China, which inspired him to create a work that shows some of the mailings pasted onto welded wire mesh.

His sister, too, defected to South Korea several years later with his help, allowing him to finally push for an exhibition on the plight of North Koreans without the fear of retaliation against his family. His mother passed away in 2005.

“Now I want to devote my art to letting the world know that everyone, including North Koreans, deserves to be free,” he said, clad in stylish blue jeans and horn-rimmed spectacles.

Stacked against each other under a few fluorescent lights, his paintings include one that shows a mass rally in Pyongyang’s huge Kim Il Sung Square while a dove gazes over it.

The dove, along with a butterfly, is a repeated theme that Song says symbolizes freedom in his works.

Another painting shows a North Korean soldier squinting at a tiny photo of a woman, which the painter says symbolizes yearning for love.

“Most North Korean men forget how to love while they serve in the army under harsh conditions for more than 10 years,” he said. “I wanted to say they, too, have the right to fall in love.”

In South Korea, Song studied painting at Hongik University, which is prominent for its arts education. One of his professors, Han Jin-man, helped him secure a free weeklong rental of a hall in Seoul starting today for his exhibition.

“[Song] could not live without expressing the trouble of youth directly in his works,” Han says in an introduction to the exhibition, praising the artist for his ability to invoke humor in a creative way, despite the many tragedies he has suffered.

One such work is the Marilyn Monroe painting, in which the 68-year-old Kim Jong-il beams sensuously as wind lifts his skirt above his voluptuous gams, an image clearly borrowed from the American actress’ trademark scene in her 1955 film “The Seven Year Itch.”

Song says even a rough sketch of such satire would have brought death on him and his family in the North.

He recalled a painter who he said got into trouble after inadvertently dropping a letter from a propaganda slogan that he wrote on a board in 1988.

Without the letter, Kim Il Sung, who is Kim Jong-il’s father and founder of North Korea, was referred to as a “sworn enemy” (won-su) instead of “Dear Marshall” (won-su-nim).

Song added some jumping fish to the Monroe-Kim painting, saying it symbolizes ordinary people struggling to escape the repressive regime in Pyongyang, which is reportedly stepping up its crackdown on dissent to facilitate another father-to-son power transfer.

Since September, North Korea has made it public that Kim Jong-un, the third son of Kim Jong-il, is being groomed to take over the regime, extending the personality cult to the 20-something man.

Song flew into a rage as soon as he heard the name of the North Korean heir apparent, then released a sigh of relief, saying, “At least now I won’t have to be part of that absurdity.”

Go Deuk-ho, a South Korean painter who is helping with Song’s upcoming exhibition, said they have discussed for months the main theme for the defector’s artworks.

“We’ve decided to ask ordinary people, not politicians, ‘What is freedom to you?’ We believe that is the theme that can ultimately unite the people of both Koreas,” he said.

Song said North Koreans are living a life “worse than that of a butterfly.”

“Millions of North Koreans are unable to enjoy what a single butterfly can: freedom. As an artist, I consider it my duty to inspire this question among both North and South Koreans.”