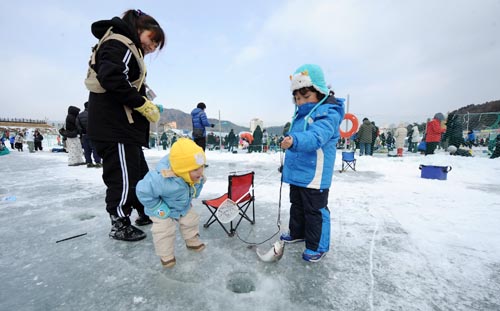 A family tries ice fishing at the Pyeongchang Trout Festival, which continues through Feb. 17 in Pyeongchang, Gangwon. The annual festival is a haven for winter sports enthusiasts. See FESTIVALS. [YONHAP]

Friday: Korea’s first generation of jazz musicians will perform together following their appearance last month in the Nam Mu-sung documentary “Bravo! Jazz Life.” The film documents the musicians’ struggle to do what they love - play music. The movie culminates in a concert organized by a group of younger jazz musicians showcasing the talents of their elders.

Songs from the documentary will be performed at the Jan. 28 concert, including “Mo’ Better Blues,” “Whisper Not” and “Moonglow.”

Feb. 11: Country pop princess Taylor Swift will be performing in her first concert in Korea. Swift, the winner of seven American Music Awards and four Grammy Awards, among many others, will perform a number of songs from her latest album “Speak,” which was released on Oct. 25. She will also perform hits from her previous albums, including songs like “Teardrops on My Guitar,” “Love Story” and “You Belong With Me.”

Feb. 20: English blues-rock guitarist and singer-songwriter Eric Clapton returns to Korea for the third time since 2007. Clapton has been inducted into the Rock and Roll Hall of Fame three times and was ranked fourth in Rolling Stone magazine’s list of the “100 Greatest Guitarists of All Time.” Clapton will perform songs from his newest album “Clapton.” He will also perform previous hits such as “Layla,” “Tears in Heaven” and “Crossroads.”

Feb. 23: Hungarian-born British classical pianist Andras Schiff is returning to Korea for his second concert since 2008.

In 1990, Schiff was the winner of the Grammy Award for Best Instrumental Soloist Performance for his version of Bach’s “English Suites,” and in 2007 he won the Royal Academy of Music Bach Prize. Schiff is one of the most renowned interpreters of Bach, Mozart, Schubert and Schumann. But for this concert, Schiff will only be playing pieces by Beethoven, including Sonata No. 30 in E major, Op. 209; Sonata No. 31 in A Flat major, Op. 110; and Sonata No. 32 in C Minor, Op. 111.

March 9: With Latin percussion, a groovy organ and West Coast soul, Santana became a major hit in 1966. Since then, the band, and the man around whom it revolves, has become the stuff of legend.

At the concert, the band will play songs from its 2010 Legacy Edition album “Supernatural,” including “Smooth” and “Maria Maria,” as well as hits from its 40-year past. Carlos Santana will also perform songs from his recently released album “Guitar Heaven: The Greatest Guitar Classics of All Time,” which features remakes of some of the most highly praised rock songs of all time.

After his death, Bailey Rae went on a spiritual hiatus for nearly two years and finally returned last year with her second album, “The Sea,” in January 2010.

At the concert, she will perform songs from “The Sea” and her eponymous first album, including songs like “Like a Star” and “Put Your Records On.”

To Sunday: The legendary story of the three musketeers, Athos, Porthos and Aramis, returns to Korea, following sold-out houses the last time it was presented here.

Feb. 24 to 27: The Korea National Ballet presents the Paris Opera Ballet’s version of “Giselle” for the first time in Korea.

The ballet tells the story of a peasant girl named Giselle, who dies but comes back as a ghost to protect her lover, Albert, from a group of evil female spirits called the Wilis.

The ballet was first presented by the French company in 1841 and the choreography is based on the original French version from the 19th century.

To March 27: “Aida” returns to Korea after a five-year absence. The story of Ethiopian princess Aida is one of forbidden love. Aida is captured and sold into slavery in Egypt, where Egyptian military commander Radames falls in love with her. As the military commander of Egypt, Radames is forbidden to love a woman from a different country and he struggles to choose between her and his service to the Pharaoh. To make matters worse, the Pharaoh’s daughter, Amneris, is in love with him. Will Radames chose love or success?

Jekyll and Hyde is set in London in 1885. Henry Jekyll is a doctor and scientist who lives with his sick father and decides to devote his life to finding a cure for his mental illness. When he decides to experiment on himself, he starts to form his frightening other half - Hyde.

To Feb. 17: Pyeongchang originally postponed the start of its annual trout festival from late December to early January because of concerns about foot-and-mouth disease. But now the festival is on and will end Feb. 17.

Pyeongchang is an alpine county and a haven for winter sports enthusiasts with an abundance of snowfall.

This festival, which offers plenty of snow, ice and trout fishing, is located on a 33,000-square-meter lot 700 meters above sea level and attracts visitors from around the country every year.

To Feb. 6: Boseong, some 400 kilometers (250 miles) south of Seoul, is one of the major tea production areas in South Korea.

Festival installations include large Christmas trees, illuminations and a tunnel of light called the “Milky Way Tunnel of Love,” which was built along paths of green tea plantations to offer fantastic night views.

To Feb. 7: Cheongpyeong, about one hour east of Seoul in Gapyeong County, Gyeonggi, is a popular winter destination for Koreans. It is situated on the banks of a beautiful lake with dramatic mountains in the surrounding area and is populated by resorts focusing on water sports. Visitors can enjoy trout fishing and various winter sports like snowmobile riding.