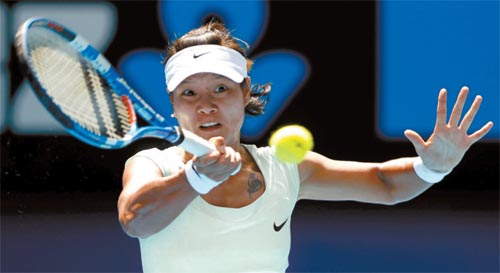 Li Na of China hits a shot to Andrea Petkovic of Germany during the quarterfinal match at the Australian Open tennis tournament in Melbourne on Jan. 25. [REUTERS/YONHAP]


MELBOURNE, Australia - Li Na has reached back-to-back semifinals at the Australian Open, setting a new benchmark for tennis in China.

She is more confident of going one better this time. Li beat Andrea Petkovic 6-2, 6-4 in the quarterfinals yesterday, breaking her German rival’s serve three times in the first set and twice in the second.

Li, who lost the 2010 semifinal in two tiebreak sets to eventual champion Serena Williams, came to Melbourne after winning the title at a tuneup event in Sydney and is on a 10-match winning streak.

“It’s good for me. I mean, the second time in the Grand Slam semifinal, always in the Australia Open, and also before I played well in Sydney,’’ she said. “Hopefully I can do better this year, and everyone will see me again.’’

The 28-year-old Li was the only quarterfinalist from the last Australian Open to reach the last eight this year. She has already been a trailblazer for tennis in her country, being the first Chinese woman to win a WTA tour event, and the first to enter the top 10. Her run to the Wimbledon quarterfinals in 2006 was the furthest a Chinese player had gone in a major. Now her return to the semis is a first.

No Chinese woman has won a major, but Petkovic thinks that can change here.

“I think she played really well. I think she’s going to win the tournament,’’ Petkovic said, identifying Li’s strength as her concealed aggression. “She moves very well, she has great footwork. She takes the ball very early. She plays flat and deep. She has this sneaky aggressive play, I would call it.’’

Li thanked Petkovic for the vote of confidence, but said she still had two difficult steps to make. A win would be career defining.

The first difficult stage: her next match is against the winner of the later quarterfinal between No. 1 Caroline Wozniacki and French Open champion Francesca Schiavone.

In the men’s tourney on Monday night, Rafael Nadal reached the quarterfinals with a 6-2, 6-4, 6-3 win over Marin Cilic, extending his winning streak to 25 in Grand Slam matches.

Nadal already holds the French, Wimbledon and U.S. Open crowns and is three wins from an Australian title. Nobody has held all four men’s majors in a calendar year at once since Rod Laver in 1969. He next plays fellow Spaniard David Ferrer, who fended off big-serving Canadian qualifier Milos Raonic.

In the previous round, Nadal had complained that a virus he picked up two weeks ago in Qatar left him weak and caused him to sweat more than usual.

“The two other days I was sweating like crazy and I felt very tired when I played the match,’’ he said. “Today was the first day that I felt perfect physically. So that is the most important thing.’’

Andy Murray, the last man to beat Nadal in a major - in their quarterfinal here last year - made only 10 unforced errors in a 6-3, 6-1, 6-1 win over No. 11 Jurgen Melzer. In the quarterfinals, he’ll meet Alexandr Dolgopolov, who ousted French Open finalist Robin Soderling.

On the women’s side, No. 3 Kim Clijsters wasted plenty of chances to break Ekaterina Makarova before winning 7-6, 6-2, while No. 2 Vera Zvonareva kept rolling toward a possible third consecutive Grand Slam final with a 6-4, 6-1 win over Iveta Benesova.

Zvonareva, who lost the Wimbledon final to Serena Williams and the U.S. Open final to Clijsters last year, moved into a quarterfinal against Petra Kvitova.

No. 12 Agnieszka Radwanska beat China’s Peng Shuai 7-5, 3-6, 7-5 and in the quarters will meet Clijsters, the growing favorite for the women’s title. Defending champion Roger Federer takes on No. 19 Stanislas Wawrinka in the first all-Swiss quarterfinal at a Grand Slam, while 2008 champion Novak Djokovic takes on Wimbledon finalist Tomas Berdych.