When there were soldiers in our songs

When there were soldiers in our songs 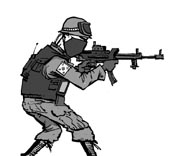 Military servicemen have long been a subject of popular music in Korea.

In the 1950s, songs about the Korean War were popular. The late singer Hyeon In’s “Rest in Peace, My Brothers” depicted the camaraderie among soldiers and the cruelty of war. The lyrics say: “Hurtling over the bodies of our brothers, we are marching forward/Goodbye, Nakdong River, we are moving forward/Brothers fade away in the smoke of Hwarang cigarettes.”

In the late ’60s and early ’70s, veterans of the Vietnam War frequently appeared in pop songs. Kim Chu-ja was the diva of the time, and she sang, “My lover gave me tears and dreams when he left/He proudly returned as Master Sergeant Kim from Vietnam.”

But then soldiers and veterans began disappearing from Korean pop music. Instead, mandatory military service was described as an undesirable break from freedom and youth. In “The Night Before Enrollment,” Choi Baek-ho sang: “I am leaving to protect my country/Raise a glass to the young.”

In the 1980s, Kim Gwang-seok sang “A Letter from a Private,” which goes: “Dear friends, please write me a letter when I am in the Army/I don’t want to forget the happy days with you.” In the 1990s, pop singer Kim Min-wu described parting with a loved one before he had to begin his service in “In the Enlistment Train”: “Will you forget about me in three years?”

But these days, it seems soldiers have lost their air of mystery and appeal. The military and soldiers are hardly ever mentioned in popular songs, probably reflecting a general reluctance to serve. What does that say about us as a society?

Although all young men have to serve in the military, Koreans are currently making a big deal out of a celebrity who characterized his enlistment as “noblesse oblige.” While the characterization is off, I can’t argue with the idea that the image of the chivalrous soldier certainly makes for better songs. When the solider in a song is poor or suffering, the songs contain complaints rather than uplifting images of heroism.

But the commandos of the Cheonghae Unit who crushed the Somali pirates and rescued all of the hostages have revived the image of the true hero. It was very impressive to see those brave soldiers risking their lives to save others. Maybe a society in which servicemen make appearances in popular songs is truly a healthy one. And maybe the commandos’ bravery will inspire a return to songs about our soldiers.