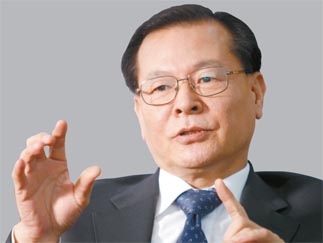 The Korea International Cooperation Agency (Koica), the country’s main channel of official development assistance, is strengthening its environmental aid programs under the banner of “green ODA.” The concept incorporates the country’s efforts to increase overseas aid and expand green growth leadership at the same time.

In a recent interview, Park Dae-won, the president of Koica, said that green ODA, along with the East Asia Climate Partnership, will be the agency’s signature program this years as the organization marks its 20th anniversary in April.

The 63-year-old former diplomat said Korea’s aid efforts help promote the country’s role as a global citizen as it repays the international assistance it once received when it was a poor, struggling nation.

The role of Koica has expanded in step with Korea’s moves to offer itself as a model for developing countries, which included sharing its development experiences at the G-20 Summit in Seoul last November.

Koica has recently consolidated a half-dozen overseas volunteer programs, separately administered by several ministries and government agencies, under the supervision of the Ministry of Foreign Affairs and Trade and Koica, which plans to send around 4,000 Koreans abroad a year under the new unified program called World Friends Korea.

A. Green ODA is a concept that encompasses all official development assistance used in helping developing countries combat climate change and realize low-carbon green growth. The scope of the projects to be implemented as part of green ODA covers such areas as energy efficiency, alternative energy, water management, environment conservation, forest management and industrial waste disposal.

The government declared its will to implement policies regarding green growth during the G-20 Summit last year and is working to serve as a bridge between developing countries and advanced countries in the green growth area. When it announced a five-year green growth plan in July 2009, it said it will expand the portion of green ODA out of the country’s total ODA from 11 percent in 2007 to 30 percent in 2020.

The members of the OECD Development Assistant Committee are earmarking 0.2 percent to 11 percent of their ODA for environmental aid. Korea’s is estimated to be about 11 percent, already the third-biggest after Japan’s 11.3 percent and Denmark’s 11.2 percent.

The East Asia Climate Partnership is a crucial tool to implement green ODA. President Lee Myung-bak first suggested the partnership during the G-8 Summit held in Japan in June 2008. The EACP will execute $200 million worth of green ODA for five years between 2008 and 2012 under the management of Koica.

What is EACP’s goal and what are its ongoing projects?

The EACP’s goal, like Korea’s existing development assistance, is to reduce poverty in developing countries and treat diseases. But it will do it in a way that protects the environment. The EACP is trying to provide custom-tailored support according to the different environmental challenges facing the recipient countries. The EACP is working on a total of 20 projects in 10 Asian countries. Among the projects, one to build a 500 kilowatt solar power plant in Sri Lanka, which Korea decided to launch in 2009, will be tested next month. Last year, three new projects were selected to help Mongolia, Sri Lanka and the Philippines, and we just selected 78 billion won ($69.5 million) worth of water projects for Mongolia, the Philippines and Azerbaijan. In addition, the EACP is working on joint businesses with international organizations.

There is some cynicism that green ODA is merely talk that lacks substance. What is your reaction?

Are there any plans other than green ODA that Koica is implementing on the occasion of its 20th anniversary?

To foster ODA-related industries and human resources at home and abroad, we are pushing forward with an ODA internship and the expansion of ODA education centers. Public-private partnership projects will also be implemented to make use of expertise and creativity in the private sector for ODA. We will also help the government in its efforts to muster resources for improved diplomacy with Asian and African countries.

How do you evaluate Koica’s performance over the past 20 years?

Korea achieved substantial socioeconomic development and democratization in a relatively short term, completing its transformation from an aid recipient to an aid donor in about 60 years. Taking advantage of Korea’s experience of rapid development in helping other developing countries, which we call the Korean aid model, has been Koica’s main activity. I think Korean-style aid has been effective, distinctive and has built Korea’s reputation as an international aid-giver successfully. The government’s grant aid program, which Koica has led, has been smoothly put in place with qualitative and quantitative improvements.