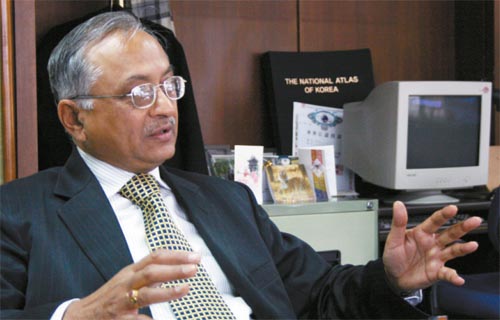 Skand M. Tayal, Indian ambassador to Korea, sits down with the Korea JoongAng Daily last Friday at the Indian Embassy. By Allen Wagner


After an economic pact signed between Korea and India in 2009 resulted in a double-digit increase in trade, the time has come for Korean companies to invest heavily in India, said Skand M. Tayal, Indian ambassador to Korea, in an interview with the Korea JoongAng Daily last week.

The economic relationship between Korea and India has flourished since the signing of the Comprehensive Economic Partnership Agreement, which took effect last January.

Exports to India increased 42.7 percent last year to $11.4 billion, according to the Korea Customs Service. Indian exports to Korea rose 37 percent on-year to $5.7 billion in the same year.

The $7.05 billion increase in trade is more than double what was forecast ahead of the treaty’s signing. Experts had predicted a rise of $3.3 billion.

In recent years, Korean companies have been keen to expand into India, attracted to the country’s large consumer market.

“Now the change is that midsized [Korean] companies are entering India. And contracts are being won for plants [and] engineering; they are being won by Korean companies. Now the scope is getting wider; it is not only manufacturing and sales but big projects and plants,” said the ambassador, who says now is the time for Korean companies to invest in India.

“South Korean companies are only coming as contractors,” said Tayal, “They should come as investors.”

Hurdles still exist for bilateral trade, which Tayal feels can easily be fixed through dialogue.

He said a “misunderstanding” resulted in a belief that it was difficult to obtain a visa to do business in India.

“We are making sure there is no difficulty for businesses to get a visa,” said Tayal, adding that the number of business visas issued from the Indian Embassy in Seoul last year was nearly 29,000, a sharp rise from 8,803 the year before. The ambassador explained that some businesspeople entered India on tourist visas intentionally.

The issue was on the agenda last Thursday when Korean Trade Minister Kim Jong-hoon was in India to meet with Anand Sharma, the union minister for commerce and industry. They agreed that the two countries would work toward signing an MOU to simplify the visa process.

As bilateral trade soared in the last 12 months, Tayal said it is Indian companies’ turn to flourish in Korea.

“Very soon Mahindra will take over Ssangyong Motors,” Tayal said, adding that companies acquired by Indian firms have “turned around.”

“[Indian companies] are able to cut costs and have better marketing strategies,” he said.

Cultural exchanges are also on the ambassador’s radar.

“Many Korean people know about some aspects of the Indian culture, like yoga and Indian food,” said Tayal.

He hopes Koreans’ knowledge of his country will expand with the construction of a cultural center in Seoul. He added that Bollywood movies will be introduced at film festivals in Seoul this year.