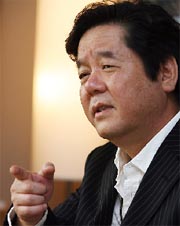 “The Last Godfather,” directed by Shim Hyung-rae, finally has a confirmed release date for North America, after the movie was released in Korea last month. The film, about a bumbling idiot who finds out he’s the only heir to a mob boss, is scheduled to open on April 1 in 12 major cities in the U.S. and Canada.

The agreement between CJ Entertainment, the film’s Korean distributor, and Lionsgate Studios was signed this week.

Lionsgate is known for hit Hollywood blockbusters like the “Saw” series and “Kick-Ass.”