Little sets the stage for his next theater success

Little sets the stage for his next theater success 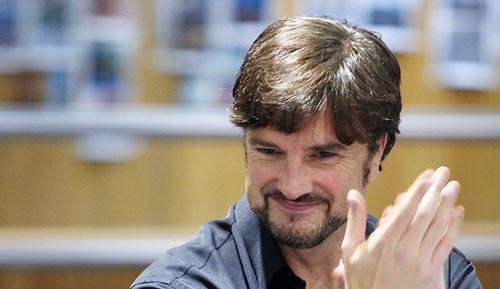 Brad Little goes over his lines in a practice room. Provided By Seol and Company


An original musical will be staged in Seoul early next month that breaks the misconception that only Korean actors perform in Korean musicals.

The musical, “Tears of Heaven,” features music produced by Frank Wildhorn, an American composer who is known for his work in “Jekyll & Hyde.” It also includes Korean pop star Kim Junsu from TVXQ and Broadway veteran Brad Little - famous for his role in “The Phantom of the Opera.”

Tears of Heaven tells the story of General Grason and a Korean soldier in the Vietnam War, who fall in love with the same woman.

For Brad Little, there is nothing new about performing in front of a Korean audience.

He performed in Korea as part of the Phantom of the Opera’s Asian tour in 2004. Then again in 2009, Little came back to light up the stage in Jekyll & Hyde.

He’s a sensation in Korea. “His voice was so charismatic. It was an overwhelming experience and it was worth every penny for the ticket,” recalled Jo Hye-jin, a 30-year-old student.

The Korea JoongAng Daily caught up with Little to talk about his experience and how Korean theater can succeed overseas at his practice room in Namsan, central Seoul, on Jan. 13.


Q. What’s it like to work with a star as famous as Kim Junsu?

A. I’ve worked with other stars before, and every time you do, it’s wonderful to see for the most part how humble they are. It’s great to see how they handle their fans and keep their fame separate from their personal lives. It’s fascinating to learn what he has to go through. And I’ll tell you, I’ve never wanted to be that way.

I’ve never wanted to be a big star like that. I want to be able to drink my tea and eat my food in privacy.


Is there anything that Kim Junsu can learn from you? He is taking his first step in theater, and as a veteran you must have a lot to share with him.

I don’t think there’s anything I can teach him. Mainly his pronunciation of English, since he talks to me in English on stage. What I can do is lead by example. I think we learned more by watching each other, not by actually teaching each other.


Can you share some stories about how you got involved in the industry?

I’ve been very lucky with my career. I would not change a thing.

My father was a theater professor, so I grew up in theater from the time I was in diapers. In high school, I was in the choir, and that’s when I really got turned on to the intricacy of the arts in music.

I didn’t go to college, but my high school music teacher really pushed us, so much so that we learned in high school what most kids learn in college. Then I moved to New York at 19 to give it a try. In the first two auditions I went out for, I got the jobs. I was very lucky. 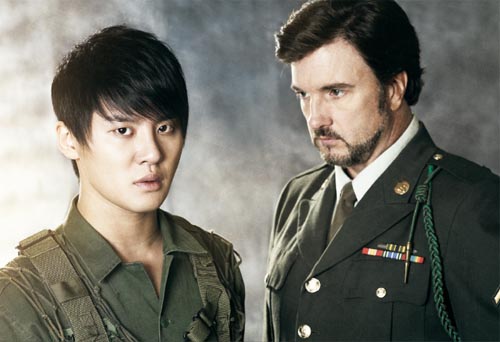 Broadway musical veteran Brad Little and Kim Junsu are the main characters in the musical “Tears of Heaven,” which opens Feb. 1. Provided by Seol and Company


As you said, you were quite lucky to have a job after your first auditions. How did your life unfold in New York?

I was poor. I literally had no money. I went to New York with $500 in my pocket in 1984. I lived in a very dangerous neighborhood of the Washington Heights area.

I lived on Kraft macaroni and cheese. To this day, when I do any show, I always get a box of mac and cheese so that I always remember where I started.

Then it stays in my cupboard until I eat it on the last day. It’s my own little tradition. It’s been maybe 16 years since I started doing that. For this show, someone’s going to try to get some macaroni and cheese for me from the U.S. Army base.


This is your fifth time performing in Korea. How did your relationship with Korea begin?

I will never forget the opening day of the Phantom of the Opera here (in Korea). I was bawling at the curtain call, and the wall of sound coming from the audience was unbelievable. That was the beginning of my love affair, and the love affair continues. I hope that audiences find it okay to have me in more of their shows.


Why do you keep coming back to Korea?

Korea hasn’t let me go and I haven’t wanted to let them let me go. That’s kind of what it is. They keep asking me to come back and every time they do, I quickly accept because I love working here.

Musical theater is still kind of young and I happened to come here at the right time. I had one person come up to me and ask “How does it feel to know that you are going down in Korean history? Even beyond musicals - you have impacted the business end so much.” It baffled me.

Truthfully, I don’t think of myself as a star. I think it’s just simply a timing thing. There are so many guys in America who wish they were in my shoes.


In terms of your ties to Korea, what do you feel when you are here?

This whole journey to the East has been an amazing chapter in my life. I have learned so much; I have given so much. It’s not just being a performer, but being an ambassador for my country.


In your opinion, why are Koreans drawn to musicals?

People who really enjoy theater almost spiritually are those who come to the theater and let their fantasy fly. This is what theater does to people. And that’s what musicals do. They open a world for people to cry and to imagine. The fact that human beings are creating this right in front of them (amazes them). Some of their fantasies are sexual or romantic - things you suppress in life. But at the theater, you can open up your black box. At the end of the show, the audience explodes with appreciation - thank you for accepting me; thank you for letting me cry; thanks for letting me express all of these things.


What would you tell people who want to become a musical performer?

Work, work, work. Just continue to work and watch the best shows. That’s what I always did. If you get an opportunity to be an understudy, work hard as if that role is yours. You will just get better the more you do. You can go to school, but there’s nothing like learning on the job.


Do you think that Korean musicals have a chance to succeed in other markets?

They might work in other Asian countries, maybe in Japan. But mainstream America will be really tough. Unless it’s a piece with minimal dialogue - with more martial arts. And the story line should be universal. I loved the musical “Hero”; I thought it was intelligent. It had great depth; it was an amazing piece of theater to look at. But I don’t think Americans would be interested in the show. It was a great musical, but the story contained too much history and culture. It’s not their country. It’s not their pride.

It might find success at the Lincoln Center for the limited run. I’m sure it would attract thousands of Americans interested in different cultures - but not enough people to support a Broadway show. This sounds terrible, but I’m just being honest.

It is exactly the same here in Korea. The shows that don’t do well here are shows based on American history such as “Oklahoma,” things that are very American. The generic shows do well on other continents. Jekyll & Hyde and the Phantom of the Opera aren’t based on history. They are just generic stories. If Korea creates generic shows like that, then yes I think they could make it on Broadway.


Do you want to perform in more Korean musicals?

I hope audiences want me to be involved with Korean shows. I could come and maybe do something like Jekyll & Hyde with the Korean cast. That’s my hope. I would like to continue to do more shows here. Years from now, I’ll be home (in the U.S.) and Korea will bloom with musicals. I’ll always have amazing pride to know that I was there for the beginning, the beginning of it all.


What would you want to tell people to have them come to the show this year?

I really hope that people come and take a chance on the show. It’s hard to take a chance on new theater, but they should know that how they react is going to affect our show and what we do. We throw an American into a show speaking English and Korean (actors) happen to speak English to me. That’s the test right now to see if audiences accept that. If they do, hopefully we’ll do more of it. I’m really hoping that they take a chance and be part of this process.

I’m really hoping that they take a chance on us. If this production reaches the next level, it’s going to be because of audiences. I hope this won’t be the last show I do here. I hope to continue and do more beyond Seoul.