Zvonareva sweeps into semifinals in Australia

Zvonareva sweeps into semifinals in Australia 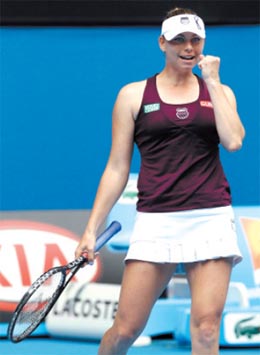 With many patrons draped in Australian flags and others wearing customary Outback-style hats in honor of the country’s national holiday, Zvonareva advanced to a semifinal against either U.S. Open champion Kim Clijsters or Agnieszka Radwanska.

Zvonareva and Kvitova were surprised during the match when cannons went off in a nearby park. And Zvonareva asked that the match be stopped for a few minutes while a woman in her sight line was given medical attention in the stands, but chair umpire Mariana Alves told them to continue.

“I didn’t know they were going to start this noise during our match, it was a difficult moment,’’ said Zvonareva, who led the final set 3-0 before the disruptions but saw Kvitova level it at 4-4. “You’re here to play tennis .?.?. I was trying to keep my concentration.’’

On Tuesday, Roger Federer was reluctant to talk about possibly playing Rafael Nadal in the Australian Open final, and with good reason.

After all, he’s playing Novak Djokovic in the semifinals.

Federer and Nadal have dominated the Grand Slam tournaments, winning 21 of the last 23 titles. But Djokovic is dangerous, and Federer knows his one-match-at-a-time mantra is a sound strategy.

“He takes it to the opponent,’’ Federer said.

On the women’s side, Caroline Wozniacki beat Francesca Schiavone 3-6, 6-3, 6-3 in one quarterfinal, and Li Na defeated Andrea Petkovic 6-2, 6-4 in the other.

It was at this stage of the 2008 Australian Open that Djokovic beat Federer before going on to win his first and only Grand Slam singles title. Federer also lost to Djokovic after having two match points in the U.S. Open semifinals last September.

“I was playing good enough to win,’’ Federer said. “But I was a bit confused mentally, maybe, because we played the second session. .?.?. Maybe I just felt like I have to get out of this match as quick as I could to save energy to play Rafa the next day. I think it ended up hurting me losing the match at the end.’’

And then Djokovic lost to Nadal in the final, giving the Spaniard his first U.S. Open title. That set him on the path toward his Rafa Slam - Nadal is aiming to be the first man since Rod Laver in 1969 to hold all four major titles at once.

Federer has twice won three consecutive majors, only to be deprived by Nadal - both times at the French Open.

Nadal plays the night quarterfinal Wednesday against David Ferrer. He has an 11-3 lead in head-to-heads. A win could set up a semifinal against Andy Murray, the only man to beat Nadal in a major in 2010. Murray takes on Alexandr Dolgopolov, the breakthrough player of the tournament, in Wednesday’s other quarterfinal.

Federer is aiming to become the second man to win five Australian Open titles - Roy Emerson won six. Federer lost the 2009 Australian final to Nadal, and didn’t even make the championship match the previous year, when he entered the tournament as the two-time defending champ.