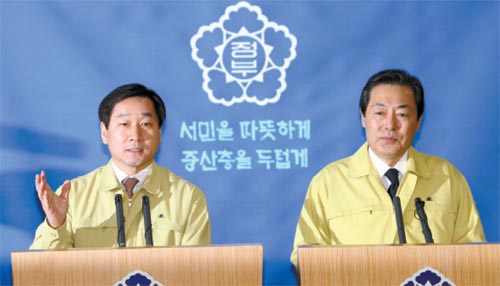 
Before en masse travel begins for the Lunar New Year holidays that start on Feb. 2, the government has appealed to the public to help fight foot-and-mouth disease (FMD). Meanwhile, critics are blaming the government’s FMD control methods for causing the nationwide spread of the disease.

Following a recent report of FMD spreading to Kimhae in South Gyeongnam, Minister Yoo Jeong-bok of the Ministry for Food, Agriculture, Forestry and Fisheries and Minister Maeng Hyung-kyu of the Ministry of Public Administration and Security made a statement yesterday at the Central Government Complex in central Seoul describing measures the public can take to help contain the disease before the holidays.

“The government will embark on a full effort to put an end to FMD as soon as possible,” said Yoo.

The government has completed vaccinating all cows and plans to finish vaccinating pigs before the holidays.

Yoo said that the public should work together by limiting visits to livestock farms, traveling to FMD-affected countries overseas and minimizing travel with vehicles involved in the livestock industry.

“The government needs the public’s help, in order to block an additional proliferation during the holidays,” said Yoo in the statement.

However, critics are saying the government’s crisis control of FMD was a failure.

A total of 2,625,553 livestock were slaughtered as of Tuesday, and the amount of compensation has reached 1.74 trillion won. The total sum of the damage is estimated at 3 trillion won, according to the government.

“The disease had already spread to Gyeonggi 10 days before Andong was confirmed to be the place of origin,” said Joo Yi-seok, head of the disease preventive department of the National Veterinary Research and Quarantine Service.

“The main cause of the nationwide spread is neglect of Gyeonggi for more than a month because everyone was following the [rules of the government] manual,” Joo said.

In the current manual, livestock within a 500-meter radius of infected farms should be slaughtered, with a transport ban and detergent washing of vehicles within a 10 kilometer radius. Although the disease has an incubation period of two weeks at maximum, there were no measures to consider regions with high possibility of infection, critics say.

An epidemiologic investigation should have been launched to carefully determine the exact infection route, but the government failed to do so since there was no record of vehicles or people passing through areas, experts say. Vaccinations were also carried out according to the manual, and they were not aggressive, giving the disease opportunities to slip by, they observed.

Lee Sang-gil, head of the food industry policy department at the Agriculture Ministry said they will “come up with a new manual so that this kind of case isn’t repeat.”

As damage costs snowball, the country is in urgent need of additional financial resources. The ministry has secured 103 billion won to control domestic animal infectious diseases, which has already been used up. Currently, the government is using a portion of its emergency reserve of 2.7 trillion won, which is earmarked for other disasters as well.

Two workers who were conducting disease surveillance and engaging in quarantine activities in affected areas died during the operation, the government said. A 23-year-old military servant surnamed Kwon, who was deployed in Gyeonggi to regulate vehicles going in and out of the area, was fatally hit by a car on Jan. 9. Another 40-year-old public official, who was also in quarantine duties, was reported to have died from working overtime on Jan. 14.