This year, graduates will have to keep clothes on

This year, graduates will have to keep clothes on 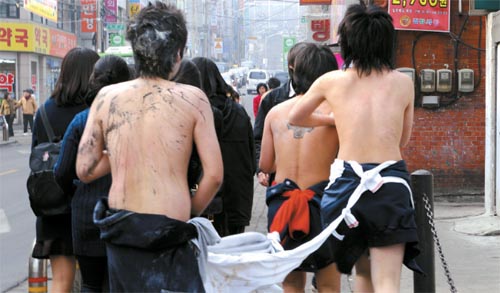 Male graduates hold a street march clad in nothing but pants near Ujangsan Station, western Seoul, after their graduation last February. [NEWSIS]


For parents, aunties and grandparents, middle and high school graduation day is a time for pride, nostalgic tears and celebration.

But for the high school students themselves it’s a step toward freedom, and as graduation day approaches next month, authorities are going to prevent graduates from celebrating too freely, raucously or butt-naked. Schools, the police and the Ministry of Education, Science and Technology have all vowed to prevent the rowdy and ribald demonstrations that occurred after last year’s graduation ceremonies across the country.

The Seoul Metropolitan Office of Education announced Monday it will deploy all teachers in the city to patrol their own schools as soon as graduation ceremonies finish. According to the office’s announcement, teachers will cooperate with police officers in their patrols, and at least one official from the office of education will be sent to each school to observe the graduations.

The shock of last year’s raucous graduation celebrations brought on the restrictions. In Goyang, northwest of Seoul, about 20 senior boys and girls took off their clothes and posed naked for photos after their graduation ceremony. The pictures spread rapidly on the Internet.

In Cheongju, North Chungcheong, male middle school graduates held a street march clad only their underpants, while 30 students in Busan went on a rampage on Heundae Beach, pelting each other with flour and eggs and ripping girls’ clothes off. On Jeju Island a dozen high school students took seven middle school graduates to a beach after their graduation, ripped off the graduates’ uniforms, underwear and stockings using scissors and razor blades, poured mayonnaise and corn syrup on their bodies and threw them into the icy sea. The attackers graduated from the same middle school.

There’s a history of raucous graduations in Korea, even uplifting ones. During Japanese colonial rule from 1910 t0 1945, high school graduates pelted themselves with flour, and ruining the school uniform was considered a protest against Japanese authorities.

In late 1990s, students expressed their sense of freedom by dying their hair or intentionally tearing their uniforms, but as time went by, such demonstrations became more aggressive and even violent.

“When I graduated from high school back in 2001, throwing eggs and flour at each other was a matter of course,” recalled Lee Eun-seon, 28. “Students who were considered to be going overboard were those who smashed the windows of teachers’ cars. But when I read the news about the violence after last year’s graduation ceremonies, I was shocked.”

“A uniform is a symbol of oppression to a student,” said Lee Ji-hwan, 36, head of the Horeb Youth Cultural Center, which runs a major camp for students in Gangwon. “Ripping or destroying it releases stress and expresses a sense of freedom.”

In an effort to stop students from desecrating their uniforms, numerous schools have started programs in which students are asked to donate their uniforms to juniors who can’t afford new ones. Kuwol Middle School in Incheon has let its graduating students wear formal clothes on graduation day instead of uniforms.

“Students here have been donating their uniforms to juniors for at least five years,” said Jeong Kwang-ho, teaching director of the school. “We have also been educating students to build their character for four years. I believe all that contributed to our school’s healthy graduation customs.”

For more than a decade, Kyunggi High School in Gangnam District, southern Seoul, has adopted robes to give a solemn atmosphere to its graduation ceremony.

Some say parents and authorities take graduation day rowdiness too seriously, and point out that graduation is the end of one phase of life and a moving on to the next.

“Students want to mark the day by doing something eventful and express their sense of freedom,” said Lee of the Horeb Youth Cultural Center.

Most middle and high schools in Seoul will hold graduation ceremonies between Feb. 9 to 11.