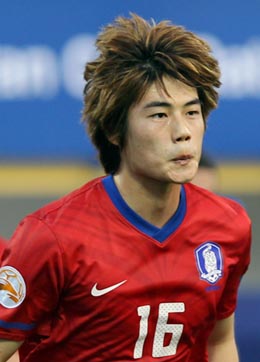 National team midfielder Ki Sung-yeung has been mired in controversy for celebrating a little too much after scoring the opening goal of Korea’s semifinal match against Japan in the 2011 Asian Cup on Tuesday night.

The 22-year-old defensive midfielder, who plays professionally for Celtic FC, scored on a penalty kick in the 23rd minute of the match to give Korea a 1-0 lead. He then proceeded to run toward the camera and imitate a monkey while celebrating the goal.

Ki has been criticized for his actions by the media and Korean and Japanese football fans alike.

“The celebration was uncalled for,” posted one disgruntled fan on www.naver.com. “It’s difficult to understand how Ki could resort to such behavior when he was on the receiving end of a similar incident against St. Johnstone last year.”

A report yesterday by Sankei Sports, a Japanese daily sports newspaper, raised the possibility of FIFA punishment. Football fans and players in certain European countries have mimicked monkey noises and expressions towards African and Asian players in the past and FIFA has responded with a “Say no to racism” campaign in recent years.

Manchester United player Federico Macheda mimicked a monkey after scoring a goal in a friendly game against FC Seoul on July 24, 2009, in Seoul, drawing the anger of Korean football fans.

Ki has yet to provide a clear explanation for his actions.

“The celebration has several meanings,” Ki said in a post-match interview on Tuesday night.

The following day, Ki wrote on his Twitter account: “I was overcome with emotions when I saw the rising-sun flag in the stands. I am a football player but I’m also a Korean citizen.”

The rising-sun flag is the military flag of Japan and was once used as the banner of the Japanese Imperial Army until the end of World War II. Korea was under Japanese colonial rule from 1910 to 1945 and the Korea and Japan football match is regarded as the fiercest rivalry in Asia.

The incident is all the more puzzling considering Ki was the subject of jeers and monkey noises from a group of fans at a Scottish Premier League match against St. Johnstone on Nov. 1, 2010.

“When Ki had the ball, two supporters jumped up and started making monkey noises,” said Celtic and national teammate Cha Du-ri in a post-game interview in November. “I have never seen anything like that. The incident is shameful and I feel angry about it. What makes it worse is we all held up cards and wore anti-racism T-shirts. ”