Top 3 is the goal at Winter Asiad

Top 3 is the goal at Winter Asiad 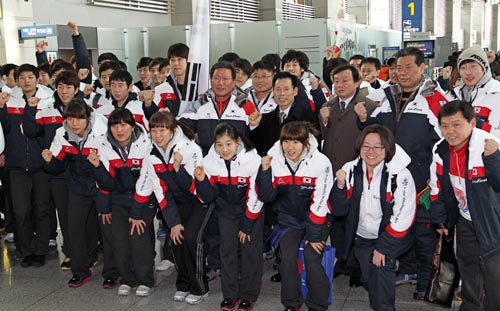 Korean athletes and coaches pose at Incheon International Airport prior to leaving to Kazakhstan for the 2011 Asian Winter Games. [YONHAP]


Sandwiched between two traditional powers and an upstart nation poised to mount a challenge, Korea will try to remain among the top three regional winter sports leaders at the upcoming Asian Winter Games.

The seventh edition of the quadrennial winter sports competition will begin on Sunday in Kazakhstan and run until Feb. 6. Astana and Almaty, the country’s two largest cities, will split the opening and closing ceremonies, and the snow and ice events.

At the last Asian Winter Games in Changchun, China, in 2007, Korea grabbed 33 medals, nine of them gold, to finish third behind China and Japan. Korean athletes and officials have said the goal this time is to retain the third spot.

“We will try to put up our all-time best performance,” Kim Jong-wook, head of the South Korean delegation, said last week during the team launching ceremony. “The goal is to win at least 10 gold medals and finish among the top three.”

Korea’s best Winter Asiad came at home in the eastern province of Gangwon in 1999, when it grabbed 11 gold medals.

Korea will likely need to match that total to stay inside the top three. And the key won’t be so much about trying to topple China or Japan as about holding off Kazakhstan.

Kazakhstan is expected to challenge China for supremacy, thanks to the addition of new events that could favor the host.

Eight gold medals are up for grabs in ski orienteering, a cross-country endurance race in which orienteering maps are used by competitors.

Bandy, another new event, is ball hockey played on ice with a football twist, involving 11 players per team competing for two 45-minute halves. The sport awards one gold medal.

Meanwhile, some of Korea’s strong events have been eliminated. Korea won both the men’s and women’s curling titles in 2007, but no stones will be thrown across the sheet this time. Alpine skiing will not include the slalom and giant slalom, either.

Korean speed skater Lee Kyou-hyuk is the two-time defending Asiad champion in the men’s 1,000-meter race, but in Kazakhstan, he won’t get a chance at his third straight title because the distance isn’t part of the speed skating program.

Kim, however, said he was confident South Korean athletes would build on their record-setting performances at the Vancouver Winter Olympics a year ago.

In February last year, Korea won six gold medals and 14 medals overall, its all-time high. It was also the first Winter Games in which the country won gold medals in a sport other than short-track speed skating, reaching the top of the podium in figure skating and speed skating.

Kim Yu-na, the gold medalist in ladies’ figure skating, has not entered the Winter Asiad because she is currently preparing for the March world championships in Tokyo. But other gold medalists from Vancouver will be on hand to duplicate their Olympics success.

Veteran Lee Kyou-hyuk recently won his fourth title at the World Sprint Speed Skating Championships, an event that combines scores from the 500-meter and 1,000-meter events. He will be a threat in the 500 meters in Kazakhstan.

Korea will also look to short trackers to keep doing what they’ve been doing - winning plenty of gold medals. Since the Asian Winter Games began in 1986, Korea has won 45 gold medals and 25 of them have come from short track.

The national short-track team will try to regroup in time after a recent race-fixing scandal forced a head coach to resign in late December.

Park Se-woo, who coached the country at the 2006 Torino Winter Olympics, is back for his second tour of duty.

On the men’s squad, Sung Si-bak and Lee Ho-suk are carry overs from Vancouver. Neither won gold in Canada, and Sung said he wants to make up for that miss with gold in Kazakhstan.

In Asian short track, Korea’s toughest challenge will be from China. Sung acknowledged it will be a difficult test but said, “We’ve trained hard and we’re all great skaters, too.”

Korean ski jumpers - Choi Heung-chul, Choi Yong-jik, Kim Hyun-ki and Kang Chil-gu - will be going after their second Asiad gold medal as a team. They won gold in the team event in 2003, but ski jumping was not included in 2007. The four ski jumpers, the subject of a hit South Korean film released in 2009, have been together for nearly a decade.

A female freestyle skier Seo Jung-hwa is another medal contender. She barely missed the moguls finals in Vancouver.