For Warhol, art was first about fame and fortune

For Warhol, art was first about fame and fortune 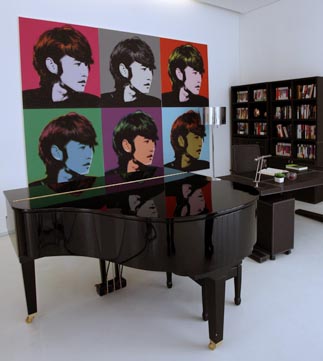 The portrait of Oscar, a character in the hit television drama “Secret Garden,” in Warhol’s signature style.

In “Secret Garden,” a recent SBS drama that took the country by storm, a common setting that caught the attention of many viewers was a house that had modern and sophisticated interior and exterior designs.

This home belonged to the two main characters in the drama, the snobby son of a conglomerate figure, Kim Ju-won, and his cousin, Oscar, who also happens to be a top hallyu, or Korean Wave, star.

The most interesting part of this home was the large portraits of Oscar, hung from ceiling to floor. One of them was in a style similar to Andy Warhol’s works. It was replicated in different colors on the same frame.

The interesting part of this scene is not just that Oscar shows a deep affection for himself that would make even Narcissus blush, but that it’s a fake representation of Warhol’s work. Since the drama is set in the present, it is impossible that the real Warhol, who died in 1987, made the silk screen for Oscar.

So why does Oscar, with so much money, hang a portrait of himself in imitation of the Warhol style instead of an original painting by a contemporary artist?

It may be, even with Oscar’s celebrity status, that he still has the gaping hole that many of us have - the desire for fame and fortune like that attained by the world’s top stars, and who Warhol not only focused on but emulated. 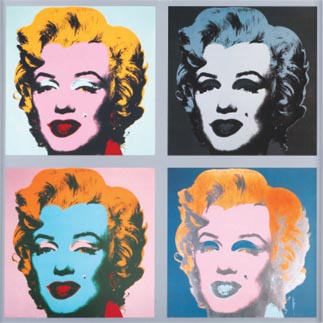 Vanity and fame was a great inspiration for the father of pop art. Warhol’s legendary years spent in Studio 54 - the most flamboyant New York City disco spot during the 70’s and early 80’s - is proof he worked to surround himself with top names in the industry. Regulars at the disco included Michael Jackson, Madonna, Liza Minnelli, Woody Allen, Diane Keaton and any other jet-setter you could think of.

Warhol also made sure to introduce subjects that were familiar to the general public. When Leonardo da Vinci’s “Mona Lisa” first was shown on U.S. soil, Warhol presented his own interpretation of the curious lady on a silk screen. The famous pieces of Marilyn Monroe and Elvis Presley are also good examples of his portrayal of social icons.

Warhol also went political - he created images of Che Guevara and Mao Zedong during a time when Communist ideology was the most feared and disturbing topic for many Americans.

Warhol knew all too well that placing himself in the center of controversy and current affairs was the direct road to success as an artist. He started to produce these attention-grabbing pieces in the 1960’s, when the impact of mass media began to ripen in American society.

Warhol was quick to notice that the public had more access to art than ever before through new and exciting media sources such as the quickly expanding influence of the television. The downside was that contemporary art was something just strange and hard to understand for the average person.

Even now, the same case applies. We all can recognize Michelangelo’s “Creation of Adam” as a masterpiece, but we’re not too sure what to make of Jackson Pollock’s paintings until a detailed description is given or an interpreter can explain the meaning behind the squiggly lines and paint splashes. 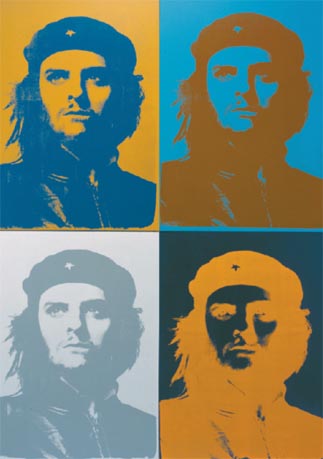 Warhol took advantage of this fact and changed his strategy. Rather than climbing up the social ladder with one inspiring piece after another, he first made a name for himself by becoming a celebrity, and then did his paintings. The basic human psychology of upgrading a dot on a canvas to a work of art when you know that it was drawn by a famous figure makes perfect sense.

So how did Warhol make himself known to the world?

His strategy was to befriend celebrities and present them as his subjects. He also regularly came out with sensational comments to make himself the center of a media field day. The plan worked like a charm. We still remember Warhol as we remember da Vinci or Van Gogh.

It is no different today. The publicity that an author receives from hundreds of good reviews is far less significant to one who perhaps made a cameo appearance on an episode of “Secret Garden.”

As Warhol saw the price of his works increase along with his fame, he happily said, “Making money is art, and working is art and good business is the best art.”

He was not afraid to be explicit about the commercialization of his works and this lead to a lot of criticism which, funnily enough, doubled and tripled his profits.

Warhol demonstrated that in a capitalist society, where mass media dominates people’s perceptions, the artist’s name value is a considerable factor in the price of his or her work.

This may not be such a bad thing. If the general public had no say, the value of art would totally be up to a handful of experts.

During the Renaissance period, an artist would be rated by the patronage of the pope or nobles.

In a socialist regime, art would only be recognized by either a government-run art association or someone affiliated with the state - the same situation that Marc Chagall found himself in Russia.

Can we honestly say that these cases are better?

The main problem with the tactic that Warhol chose is that popularity could be manipulated by a certain group of elites, and artists can choose to seek fame and fortune rather than producing true pieces of art.

Im Geun-hye, the former curator of the Seoul Museum of Art touched on the phenomenon in her book, “The Empire of Creation.”

“The term, ‘being swept up in madness’ may be an expression for those who still possess a long-lived passion for the arts. But, this term can substituted with the word, ‘showmanship’ as related to the impact of mass media.”An English contemporary artist, Gavin Turk, continues to raise questions about the love and hate relationship between mass media and art. In an exhibition held at the Park Ryu Sook Gallery last year, he presented a silk screen of Che Guevara in Warhol’s signature style with an image of himself replacing the Marxist revolutionary. He throws the question to the viewers, “Is the only difference of value in Warhol’s and my portrait the name of the artist?”

The interesting thing is, Turk has made a name for himself now. He is one of the YBA, or Young British Artists, named by the advertising giant, Charles Saatchi.

Now, people will start buying Turk’s works without knowing if this is an homage or a parody of the great Andy Warhol.