If you have nothing good to say, zip it

If you have nothing good to say, zip it 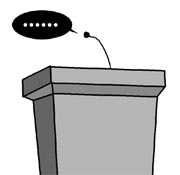 Posture, speech, writing and judgment have long been the four criteria of judging a person, but many a great man were not eloquent speakers. Moses - who led the Israelites out of Egypt - stuttered when he spoke. Moses said in Exodus 4:10: “Pardon your servant, Lord. I have never been eloquent, neither in the past nor since you have spoken to your servant. I am slow of speech and tongue.” However, God chose Moses over a eloquent Aaron as the leader. Martin Buber, the Jewish philosopher, called Moses’ slow speech “the tragedy inherent in Revelation.” Moses stood in front of the Pharaoh and stuttered, “Let my people go.”

Demosthenes was a great Greek orator, but he too had a speech impairment. His pronunciation was poor, so he trained himself by placing a small stone in his mouth and running up a hill to practice vocalization. He placed the most emphasis on reading because clear and insightful ideas are more important than eloquent speech. Greek philosopher Aristotle also stuttered.

Su Qin and Zhang Yi, the political strategists who initiated the Vertical Alliance during the Warring States period of Chinese history, controlled the world with their speeches. In contrast, Han Fei, who had developed the foundation of legalism in the state of Qin, had a serious speech impairment. However, he spoke with his pen, not tongue.

British Prime Minister Winston Churchill stuttered, too. He could not pronounce the letter “s” properly, so he was ridiculed for sounding like he was drunk. When World War II broke out, though, he moved the hearts of his countrymen with a memorable speech at the House of Commons: “I have nothing to offer but blood, toil, tears and sweat.” The monarch at the time was King George VI, who had a stammer. He corrected his speech impairment with the help of an Australian speech therapist. Later, he announced on radio that England had declared war against Germany. Unlike Adolf Hitler, the persuasive Nazi leader, George VI moved the hearts and evoked powerful empathy from his citizens. The biopic “The King’s Speech” received 12 Oscar nominations this year.

Korean politicians may need to contemplate how they can move hearts and abandon sophistry and obstinacy. U.S. President Barack Obama proved that 51 seconds of silence is more powerful than fancy words. If you cannot move hearts with powerful and sincere words, sometimes it’s best not to say anything at all.