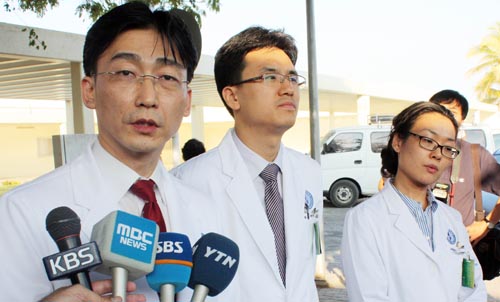 A medical team led by Lee Guk-jong, left, of Ajou University talks with Korean reporters after it conducted a second surgery on Seok Hae-gyun, the wounded captain of the Samho Jewelry, yesterday in Salalah, Oman. [YONHAP]


After undergoing a second operation Wednesday, Seok Hae-gyun, the captain of the tanker rescued by the Korean military from Somali pirates last week, is in critical condition and it remains to be seen whether he will make it back to Korea.

According to the Ministry of Foreign Affairs and Trade yesterday, Seok underwent surgery to remove portions of necrotic skin that developed from infections from wounds on his right side. The surgery on Wednesday ended successfully.

After the Samho Jewelry was rescued, the military disclosed that Seok’s bravery and quick wits helped them free the rest of the 21-man crew without harm.

A medical team led by Lee Guk-jong of Ajou University, including another surgeon and a nurse, was sent Tuesday to the Sultan Qaboos Hospital in Salalah, Oman, where the captain is hospitalized. Lee is recognized as a gunshot wound expert in Korea.

“The patient has traumatic external wounds,” said Lee in a press briefing after the surgery. “He has received multiple shots to his stomach area, causing ruptures in his inner organs. We have stopped some of the internal bleeding through an emergency operation, but his condition is a precarious one because of infections and other related complications.

“I cannot say exactly how many shots were fired into his body. Bullets usually do not keep their shape and form when they enter a person’s body but are rather crushed or fracture. His inner organs have been severely damaged because of the gunshot wounds, causing infections to spread and causing even more problems,” Lee added.

According to Lee’s medical team, both of Seok’s thighs, an arm and a hip are fractured as well. The military said this week that Seok had struggled with the pirates. The team has identified three entry points for bullets on his body.

“Seok is alive because the first surgery went well,” Lee said. “He will need additional operations. Doctors often say that for external injury patients, the end of the operations is just the beginning of the fight. Things can happen after operations and [the patients] should be given great care.”

Due to the severity of Seok’s condition, the government and medical staff have decided to indefinitely delay plans for his move back to Korea. Seok was reported by medical staff in Oman to be unconscious after the second surgery and was unable to recognize his family, who arrived at the hospital on Wednesday.

The captain is currently under the care of Lee’s team as well as the local medical staff, who tended to Seok after the rescue.