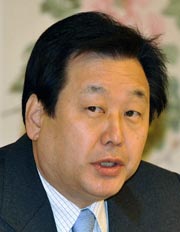 In a stronger push for a constitutional amendment, the ruling party yesterday unveiled a plan to create a special committee in the National Assembly next month to discuss the issue.

In a meeting between senior members of the GNP and the administration, GNP floor leader Kim Moo-sung said the ruling party will push for the formation of a special committee on the constitutional amendment in an extra session of the National Assembly next month.

According to Kim, the 30-day session will begin Feb. 1, although the Democrats have not agreed to the session, in part because it wants an apology from President Lee Myung-bak for a recent spell of high tension in the legislature.

“The DP demands that President Lee apologize for the ruling party’s budget bill passage at the end of last year, but it’s unreasonable,” he said. “I will make sure that the [tone of the] legislature can be normalized with my [own] apology.”

Lee wants to end Korea’s five-year presidency in one of three ways: to adopt the American system of four-year terms and the ability to be re-elected; a parliamentary system; or to divide power between the president and the prime minister in a so-called semi-presidential system, with elections for president separate from general elections.

Lee Jae-oh said all governing systems should be considered as part of ending the current single-term, five-year presidency. The minister said changes are needed to make the country more transparent.

About 20 GNP lawmakers loyal to President Lee attended the event yesterday to support the campaign. “It is my conviction to update the Constitution to reflect the times,” said Ahn Sang-soo, GNP chairman. “It is also a promise made to the people to discuss the issue during this National Assembly,” Ahn said.