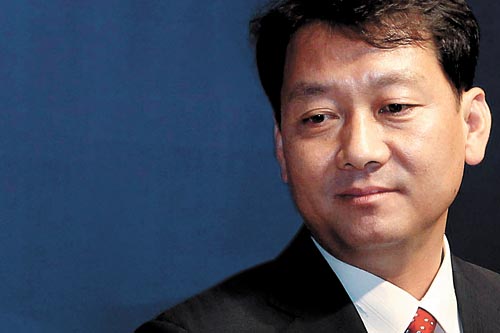 The Supreme Court yesterday upheld the conviction of Gangwon Governor Lee Kwang-jae in a graft scandal and confirmed the tough punishment handed down by a lower court, effectively nulling his election victory only seven months ago.

The court turned down an appeal by the 46-year-old liberal politician, who had earlier been convicted by district and high courts on charges of receiving bribes from Busan-based businessman Park Yeon-cha. The Supreme Court also upheld the Seoul High Court’s sentence of a six-month prison term suspended for one year, and 114 million won ($102,325) in fines.

The punishment was heavy enough to remove Lee from office. Under current law, an elected official who is fined more than 1 million won for a crime loses his job.

The Supreme Court yesterday also upheld convictions of two lawmakers - a Democrat and a Grand National - on charges of receiving bribes from Park. While the punishment was heavy enough for the DP to lose a lawmaker in the National Assembly, the GNP legislator was able to keep his job.

Lee, who was the right-hand man of former President Roh Moo-hyun, was indicted in April 2009 on charges of receiving $120,000 and 20 million won from Park, a key Roh patron, from 2004 to 2008 in four batches. Lee was also accused of receiving $20,000 from former Nonghyup Chairman Chung Dae-kun in 2006 and receiving another 10 million won from an in-law of a former Blue House secretary in 2004.

Lee, who is a Democrat, was elected as Gangwon governor last June. The governor-elect, however, was found guilty by the high court nine days after the victory.

In a separate but related case, the Supreme Court upheld the high court’s conviction of Democratic Representative Suh Gab-won and a sentence of 17 million won in fines for also receiving bribes from Park Yeon-cha, who was the former chairman of Taekwang Industrial. The punishment was also heavy enough for Suh to lose his post representing Suncheon, South Jeolla.

The Supreme Court also upheld the high court’s conviction of Grand National Representative Park Jin, who was found guilty of receiving bribes from Park. The GNP lawmaker, however, was fined 800,000 won, allowing him to keep his legislative seat.

Three others involved in the massive bribery scandal, including Park himself, also received Supreme Court rulings yesterday. The top court confirmed the acquittal of former Seoul Deputy Mayor Lee Sang-chul and the conviction of Chung, the former Nonghyup chairman.

The court yesterday sent Park Yeon-cha’s case to the Seoul High Court for a retrial because one of the officials accused of receiving bribes from him was acquitted yesterday.

Park had been convicted by the high court of operating a massive network to distribute bribes, creating slush funds and evading tax, and had been ordered to serve two years and six months in prison and pay 30 billion won in fines.

While the Grand National Party said it respected the Supreme Court rulings, the Democratic Party was furious.

“The judgments are undeniably political, following an investigation with hidden intentions,” said DP spokesman Lee Chun-seok. “Money was given under exactly the same circumstances, but one party was found guilty, while another was not. The only difference was their party affiliations; one was a Grand National and the others were Democrats.”

Known as “Park Yeon-cha Gate” by local media, the massive political payoff network reached the top politicians of the ruling and opposition parties, as well as officials of the Roh Moo-hyun and Lee Myung-bak administration. Since the probe opened with Park’s arrest in 2008, 21 people including Park were indicted for involvement.

It also touched the family of Roh, and the former president committed suicide in May 2009 shortly after he was questioned by the prosecution about bribery allegations.

Of the 21 suspects, the Supreme Court confirmed rulings on 19 people as of yesterday. Two of the 19 were acquitted.

The two remaining cases are Park’s retrial and the pending trial of Chun Shin-il, a businessman and a close friend of President Lee Myung-bak, at the Supreme Court. Chun had been convicted of using his influence to ease a tax probe on Taekwang Industrial and Park.

Yesterday’s rulings by the Supreme Court also created more vacancies to be filled in the April 27 by-elections. As of yesterday, six elections - three to elect lawmakers and three to elect local government heads - are to take place in April.

More vacancies are also expected as two GNP lawmakers representing Seoul’s Gangnam B and Nowon A districts as well as some local government heads, including Seoul’s Jung District chief, were appealing convictions for election law violations. If the Supreme Court rules on their cases and confirms appeals courts’ convictions and sentences before March 31, by-elections are to take place for 10 positions.

The by-elections, as more vacancies are created in key posts, will be seen as a litmus test before next year’s general elections, and both the Grand Nationals and Democrats are starting to gear up for the elections.