Chasing a dream even with a disability

Chasing a dream even with a disability 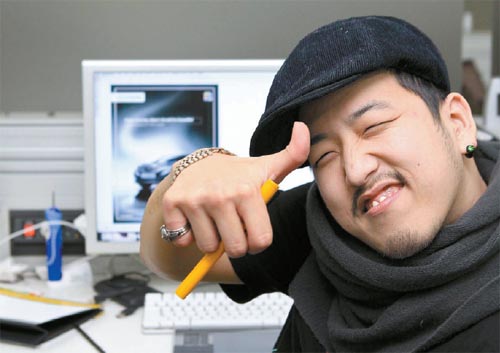 Jeon Woo-young, 24, in an interview at the Innocean office on Jan. 26. By Kim Hyung-soo


Last Monday, as 24-year-old Jeon Woo-young was preparing to leave for his first day in the working world, his mother gave him some advice.

“Don’t get anxious about what other people say,” she told him. “Just work hard, with earnestness and sincerity. If you follow my advice, you’ll do fine.”

Mothers worry, and Jeon’s had particular reason to do so. Jeon has had cerebral palsy since birth.

But he still managed to land a job as a copywriter at the country’s second biggest advertising agency, Innocean, despite fierce competition. He was among three of 300 applicants who got employed. On his first day at work, Jeon had to deliver an advertising proposal for the Hyundai Accent compact car that he worked on with fellow newcomers during three weeks of company training camp.

Jeon asked his colleagues if he could be excused from speaking at the presentation because he was afraid his disability would be a negative factor in the team’s assessment. His colleagues refused: they said since he had come up with most of the ideas, he had to speak.

Jeon stayed up until 5 a.m. in the morning to finish off the presentation. With only two hours of sleep, Jeon started the presentation, in front of the company’s CEO, speaking slowly and clearly.

“A hottie walks down the street,” he said, pointing to a prepared storyboard. “Then this young guy asks her to hop in to his car, full of confidence.”

The apprehensive atmosphere in the room dissolved into laughter.

Since he was a boy, Jeon was attracted to images and writing. He watched television commercials over and over and would rerun movies five or six times. He even wrote down great scenes or famous lines.

All that voluntary immersion into advertising is now his greatest asset. One bookshelf in Jeon’s room is jammed with 12 diaries from his youth and 700 DVDs arranged by genre.

Jeon’s parents raised him like any other child in the neighborhood, giving him no special treatment just because he was disabled. He followed his father to Paris and graduated from a Catholic middle school and an international high school. Returning to Seoul, he graduated from Dankook University and majored in mass communications.

Jeon said he first realized he was different from other kids when he went to elementary school. He recalls a bunch of his classmates pointing and staring at him.

“Although I have a physical disability, I have gained a lot of sensitivity,” Jeon said. “It’s like how the blind develop keener hearing.

“It’s so much easier for a disabled person to become the center of attention. First of all, you stand out. And if you are destined to stand out, you might as well enjoy it.”

Being a copywriter requires cooperation and team work, and that was the factor that most worried Innocean about Jeon’s job application. But people who worked with him during an earlier internship praised him.

“All the creative directors at the company agreed to employ him,” said Lee Jin-hyeong, personnel team leader at the company. “One of the directors who was on a business trip abroad called to urge the company to accept Jeon. Other employees assessed Jeon as an excellent copywriter, not only because of his talent but also because he exudes energy and vitality.”

Said Jeon: “A great copywriter needs not only creativity but an ability to understand other people’s needs and desires. And I think I am in an advantageous position in that sense. I want to breathe new life and energy into words.”