Merits of reporting for citizens’ panel

Merits of reporting for citizens’ panel 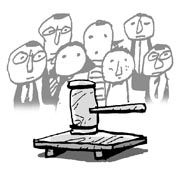 The classic film “12 Angry Men” is about the irrationality of the jury system. At a glance, it may look like just another black and white movie from the 50s, but it is considered one of the best movies ever made for good reason.

The plot tells the story of a boy charged with murdering his father and a juror who proves his innocence. The audience witnesses how irresponsible, biased and incurious jurors can be.

The shortcomings of the jury system are almost inherent. Ignorant jurors of Athens found a great philosopher guilty and sentenced him to death.

During the American Civil War, sheriffs and judges would pick jurors at their discretion. Relatives of the accused often sat as jurors, and when drunkards who had been chosen as jurors did not appear, anyone would be grabbed off the street to fill in.

American football legend O.J. Simpson was tried for murdering his ex-wife and Ron Goldman in 1995, and despite convincing evidence, he was found not guilty. Some blamed the acquittal on the emotions of jurors.

Nevertheless, the jury remains as an important element in any justice system. Two years ago, the jury system was adopted in Japan, where jury elitism prevails.

The jury system is the global trend. The unanimous opinion of citizens with common sense has more wisdom and justice than the judgment of a few elite judges.

It was a prosecution panel made up of civilian representatives that brought Ichiro Ozawa, one of Japan’s most influential politicians, to trial.

Reporting for jury duty can be annoying. You have to take a few days off from work, no matter how busy you are.

Some Korean-Americans say they hold on to permanent resident status, opting not to obtain U.S. citizenship, just to avoid being summoned as jurors.

Recently, U.S. Vice President Joe Biden was selected as a juror and summoned to a court 180 kilometers (112 miles) from Washington D.C. He could have declined, but he reported to the Delaware court and said, “This is important. It is an honor to be a part of the system.”

A “citizens’ panel” - Korean-style jury system - was introduced four years ago. However, less than 60 percent of Koreans chosen to serve have reported for duty.

But 75 percent of those that did report said they were satisfied with their service; 25 percent said the experience was average, while not one person was discontent.

It may be a great PR strategy to publicize that serving in court is not just a duty - but it’s also a great experience.

*The writer is a senior international reporter at the JoongAng Ilbo.