‘Every woman is pretty regardless of her age’

‘Every woman is pretty regardless of her age’ 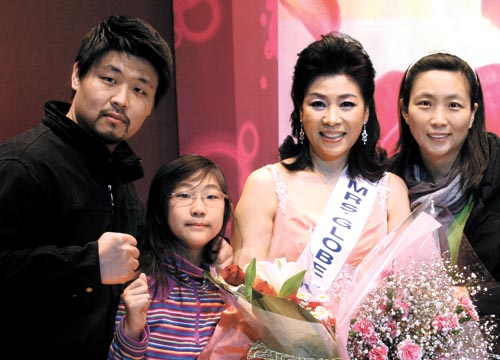 
A woman in her late 50s competed in the Mrs. Globe Korea 2011 contest at Seoul Women’s Plaza on Tuesday, winning the talent portion.

The winner of the competition goes on to represent Korea in the Mrs. Globe 2011, one of the world’s most recognized beauty pageants for married women. It is the first time Korea has participated since the pageant debuted in 2006.

Of the 26 finalists on stage, Jeong was the oldest. She was three decades older than the youngest contender, who was 27.

“As a mother of two sons and a grandmother, I wanted to show the power of married woman. Aren’t you itching to know about the charms of ajumma?” asked a perky Jeong.

Physically, Jeong does not look like a superb candidate. She stands only 163 centimeters (5 feet 4 inches) tall and weighs about 50 kilograms (110 pounds). After she changed into her peachy dress, exposing her plump forearms, the woman dubbed it “superpower of ajumma.”

Jeong won the talent segment, as she perfectly performed a Latin dance, drawing a loud round of applause.

“Every woman has a genuine beauty regardless of her age,” she said.

Other participants in their 20s to 50s tried but could not beat Jeong. “There were a lot of beautiful young ladies, but I guess I was a cut above. In fact, I wanted to win first place,” said Jeong.

Jeong runs a singing class in Cheongdam-dong, Seoul. Dance has been her hobby for the last 20 years.

“You should definitely learn dancing and singing when you reach 60 years old. It keeps you young because you use the muscles in your face, and releases endorphins that make you even healthier,” Jeong added.

Jeong referred to herself as a “flower ajumma,” in that she has the charm to beat younger women.

“Rather than going crazy about Miss Korea with a slender waist, who has never been through the bitter taste of life, don’t you think we should choose a superpower ajumma?”