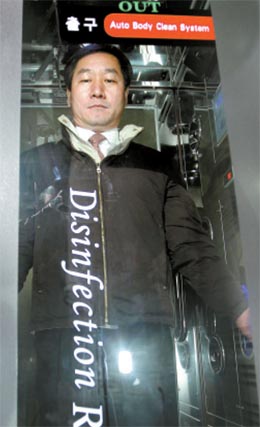 Agriculture Minister Yoo Jeong-bok tests the full-body disinfection booth at Incheon International Airport yesterday after he announced his intention to step down to take responsibility for the spread of foot-and-mouth disease. [YONHAP]

Taking responsibility for the botched attempt to fight the country’s worst outbreak of foot-and-mouth disease (FMD), Minister for Food, Agriculture, Forestry and Fisheries Yoo Jeong-bok offered to step down from his post yesterday.

“I will do my best to put an end to this crisis as soon as possible and resign after clearing up the situation,” Yoo said at an urgently called media conference yesterday. “As minister, I will take all responsibility for the current outbreak and I will fulfill my duty as a public servant until the last day.”

The Blue House did not issue any official response to Yoo’s offer to resign.

Since the first outbreak was reported on Nov. 23 in Andong, North Gyeongsang, the government has been forced to cull nearly 3 million farm animals over the past two months, costing about 1.4 trillion won ($1.3 billion) in compensation to farmers. According to the government, more than 2.63 million pigs and nearly 144,600 cows were killed.

As the disease spread quickly and widely, Yoo stood at the center of fierce criticism from not only the opposition parties, but also some inside the ruling party.

Yoo, however, said that the politicians’ blame game won’t help resolve the situation. “Because of the vaccination, the disease appeared to have calmed down a bit recently,” Yoo said. “But it is premature to say that the situation has ended. Now is the time to concentrate all thoughts and abilities to end the outbreak.

Yoo, a two-term lawmaker of the Grand National Party, was nominated to head the Ministry for Food, Agriculture, Forestry and Fisheries in August during the cabinet reshuffle. The appointment was seen as being highly political since Yoo was the former chief of staff for Park Geun-hye, President Lee Myung-bak’s GNP rival. The decision was seen as an attempt to reconcile the rival factions inside the GNP.

Opposition parties have criticized Yoo for lacking expertise in the field. Shortly after his appointment, Yoo faced skyrocketing prices for cabbage. The outbreak of FMD followed, and the Agriculture Ministry was soon under fire for its slow response. Poor quarantine measures and reluctance to order vaccinations were blamed for the epidemic.

The GNP remained cautious yesterday about Yoo’s move, asking the minister to complete his fight against the disease, rather than talking about responsibility. The opposition parties, however, intensified their attacks on the Lee administration, demanding more than the minister’s head. “Yoo’s resignation is an obvious consequence, but it’s not enough to resolve the problem,” DP’s spokeswoman Cha Young said in a statement.