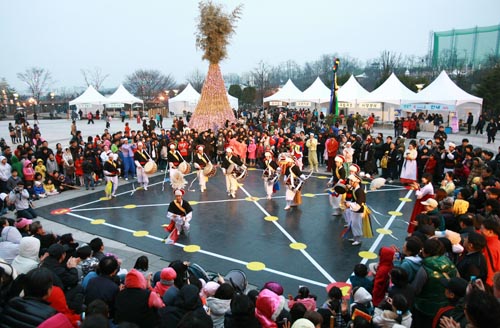 The New Year’s Day Festival, hosted by the National Theater of Korea, will be held on Thursday, featuring outdoor music performances, events and activities, such as kite-flying. The festival will be held at the theater’s Cultural Plaza. Provided by NTOK


This week, tens of thousands of city-dwellers will pack their bags, load up their cars with gift sets of tuna and Spam and hit the road to visit family members in other areas of the country over the Lunar New Year holiday, also known as Seollal.

It’s a special time of year for many Koreans, who often gather with the extended family to catch up, eat together and engage in the traditional practice of bowing to elders.

But many citizens in the nation’s capital will also bypass tradition this time around and stay hunkered down at home to avoid the traffic-clogged roads and packed trains, recover from the recent bout of brutally cold weather or just avoid family drama.

Those who choose to stay in town don’t have to give up on the holiday entirely, however, as local theaters and organizations are hosting a whole host of events to get in the Seollal spirit. As an added bonus, the temperatures are supposed to climb a bit tomorrow, making it much easier to venture out from the warm confines of your home. The following is a list of holiday-themed performances and events on tap this week. 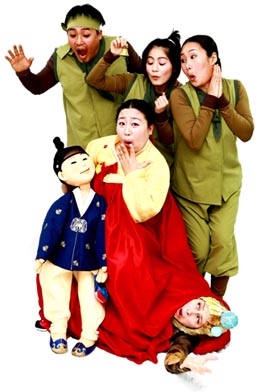 The performance “Farting Daughter-in-law” uses flatulence as a comic device, incorporating traditional music and dolls. It runs until Feb. 27 at Seoul Namsan Gugakdang. Provided by Sadari

Breaking wind can be an embarrassing experience - or an uproariously funny one.

Just look to the slew of movies and television shows that use cutting the cheese as a punch line. If you want to mix some tradition with a bit of flatulence-fueled laughter, check out “Farting Daughter-in-law” at Seoul Namsan Gugakdang. The story centers on Bong-soon, a newlywed bride who is kicked out of her house after letting an enormously powerful one rip. In the performance, which uses traditional music and dolls, the fart itself is portrayed as a good omen and a sign of luck rather than an embarrassing emission.

To celebrate the Year of the Rabbit, the National Theater of Korea is performing a play called “Tokkijeon” on Thursday. The Miru performance team restructured one of its most popular plays into more of a family musical that incorporates traditional Korean orchestra music and folk songs. Those in attendance can win prizes, including tickets for free winter snacks such as baked corn, sweet potatoes and chestnuts.

The theater will also host the New Year’s Day Festival on Thursday at its Cultural Plaza. The festival will offer visitors the chance to participate in a treasure hunt and a variety of popular winter events, such as kite-flying and yutnori, a traditional board game.

“Tokkijeon” starts at 4 p.m. on Thursday, while the festival runs from noon to 6 p.m. on the same day. Tickets for the performance range from 5,000 won to 10,000 won, and admission to the festival is free of charge. Children under the age of four cannot view the performance. For more information, call (02) 2280-4115~6, or visit www.ntok.go.kr. 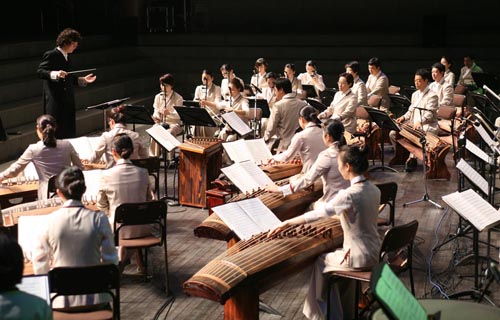 The music choices were selected via a competition that started last May to celebrate the 60th anniversary of the center’s opening.

The lineup varies each day. On Thursday, the performance will be focused on songs about rabbits, while on Friday and Saturday the lineup will feature pieces selected from the competition.

The performance on Friday will also open with a song composed by Belgian composer and violinist Baeudouin Dejaer.

An hour before the performances begin, visitors are invited to make their own kites and fly them, while after the event they can sample some gangjeong, or fried glutinous rice crackers with sesame or beans.

If you’re looking to move on from the cold weather - at least from a mental perspective - you can celebrate what Koreans consider to be the start of spring. Ipchun, which means the first day of spring, falls on Friday this year, coinciding with the Lunar New Year holiday. The museum will hold an event on Friday in which visitors can get their family mottos written on paper by a professional calligrapher. This tradition can be traced back to the Joseon Dynasty, when locals would write messages on paper wishing good luck and good health and stick them to pillars and railings within the palace grounds.

Events will be held from 10 a.m. to 5 p.m. on both Friday and Saturday in the second floor lobby of the National Palace Museum of Korea.

This unique attraction is offering an array of diverse traditional performances and games, food-tasting events and a prehistoric-culture experience program on Thursday and Friday. Visitors can try their hand a variety of traditional games.

They can also make their own traditional masks, rice cakes and patterned earthenware to get a taste of what life was like in the area thousands of years ago.

Visitors can also write their wishes for the new year on paper and tie them to trees for free from Wednesday to Friday. Anyone wearing hanbok, or traditional Korean clothing, can enter the village for free of charge.