Japan’s Tandari Lee, left, shoots to score a goal against Australia’s goalkeeper Mark Schwarzer during the final match of the AFC Asian Cup on Saturday. Japan won the match and tournament. [AP/YONHAP]


DOHA, Qatar - Japan won the Asian Cup for a record fourth time when substitute striker Tadanari Lee struck in extra time for a 1-0 victory over Australia on Saturday.

Lee - a Japanese citizen of Korean heritage who trained with the U-19 Korean national team in 2004 - slammed home a left-foot volley in the 109th minute when he was left completely unmarked 10 meters (32 feet) from Australia’s goal. Lee had all the time in the world to perfectly time his shot from a cross by defender Yuto Nagatomo and fire it past Australia goalkeeper Mark Schwarzer.

Lee, celebrating his first goal for Japan, then ran to the center circle and fired a symbolic arrow into the night sky over the Khalifa stadium as a row of small fireworks exploded across the structure arch to celebrate the goal.

“We played the entire tournament with great courage and always sought to impose our game,’’ said Japan’s Italian coach, Alberto Zaccheroni. “We have a very young team. The bench players have made a big contribution, just as Lee did today.’’ 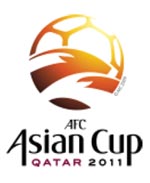 Japan midfielder Keisuke Honda, one of the most enterprising players in the final, was voted the tournament’s most valuable player.

Australia was in its first final since switching from Oceania to Asia in 2006 and also lost to Japan in the quarterfinals on penalties four years ago. It will now have the chance to go for the title when it hosts the tournament in 2015.

Qatar has won the bid to stage the 2022 World Cup, and the Asian Cup was the tiny but wealthy Gulf nation’s first rehearsal for the showcase tournament of world soccer.

FIFA president Sepp Blatter attended the final and sat on one side of Asian Football Confederation President Mohamed Bin Hammam, a Qatari who may challenge Blatter for the presidency of the world football body. UEFA president Michel Platini sat on the other side of Bin Hammam.

Both teams had their chances in regulation but the Socceroos could have clinched it in the first extra period.

Harry Kewell pushed the ball to substitute Brett Emerton in the 102nd, but he drove his left-footed shot wide to waste the best chance any team had in extra time until Robbie Kruse’s header was dug out by Japan goalkeeper Eiji Kawashima in the 104th. 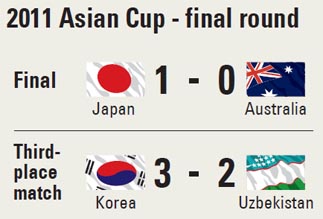 Matt McKay had another effort sail high late in the first period of extra time. The defeat meant no major international trophy for Kewell and Tim Cahill, Australia’s best known stars, who were both substituted and saw Japan’s triumph from the bench.

“We are disappointed that we ended up second,’’ Australia coach Holger Osieck said. “We had our opportunities but unfortunately we couldn’t convert. We had to be more clinical in our finishing.’’

The mood in the dressing room was sad, Osieck said, adding “I feel sorry for the boys, they didn’t get the reward for all their efforts.’’

Osieck said his players paid the price for fatigue in extra time when they failed to mark Lee.

“It was the only position mistake we made and it was a very costly one,’’ Osieck said.

Japan, which needed extra time and penalties to beat South Korea in the semifinals and was without injured midfielder Shinji Kagawa, allowed Australia more chances in the first half, but Japan had better opportunities when it started applying more pressure midway through the second half.

Meanwhile, Korea defeated Uzbekistan, 3-2, in the third-place match held on Saturday at midnight. Korea was awarded the Fair Play Award by the AFC by collecting a total of 12 yellow cards and one red card, tying Uzbekistan for the least number of warnings in the tourney.