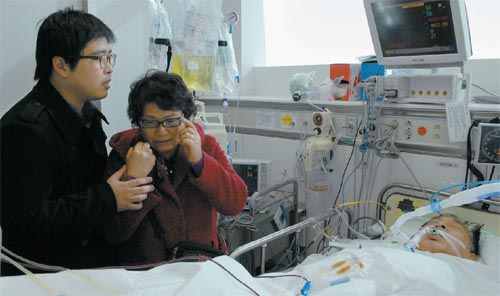 
Seok Hae-gyun, the wounded captain of the Samho Jewelry, is back in Korea but in grave condition after immediately going through hours of surgery following his arrival.

The injured captain arrived at Seoul Airport in Seongnam, Gyeonggi, at 10:33 p.m. Saturday night after an 11-hour flight on a private jet provided by International SOS, during which Seok was sedated. International SOS is an international health care, medical assistance and security services company.

Seok was moved to Ajou University Hospital in Suwon, Gyeonggi, and went into the operating room at 12:15 a.m., undergoing three hours of surgery for his multiple injuries.

“[Seok] was in very grave condition” hospital director Ryu Hee-sug said after the operation. “Things could have taken a turn for the worse had he stayed in Oman for a few more days. It was an appropriate decision to bring him to Korea for the surgery.

“We cannot be optimistic or pessimistic about the situation yet,” Ryu added. “We will also continue treatment to keep the patient stable. The next two to three days will be crucial to his recovery.”

The director said discharged matter had been removed from a large infected area on Seok’s right side where he was shot. Seok’s entire right side, from his armpit to his right thigh, was severely infected, resulting in skin and muscle necrosis.

Surgeons removed two bullets from each leg and removed a foreign substance found 15 centimeters (5.9 inches) above his left wrist, which fractured after a bullet went through it.

Seok also sustained comminuted fractures on his left thigh and a compound fracture above his right knee from being shot. Seok’s liver and large intestine were also found to have been ruptured from gunshots.

The captain is suffering from various complications from his infections, including blood poisoning and disseminated intravascular coagulation, or clots in blood vessels all over the body.

The hospital said that Seok needs several more operations, but an exact schedule has not been set. Fragments of bullets remain in Seok’s body, Ryu said, which the hospital will have to remove later on. The medical staff was unable to answer how many bullets remain in the captain’s body.

Four bullets have been extracted from Seok, and the hospital reported that they found six entry points.

Ryu said that Seok’s condition had not worsened 12 hours after the surgery.

“Seeing the overall results, it has been determined that Seok’s major organs will not deteriorate any further,” he said.

Ajou University Hospital was selected to treat Seok because of its specialization in external injuries. And the Ministry of Health and Welfare tabbed the hospital as a special facility for traumatic external injuries last April, along with 35 other hospitals in Korea.

Meanwhile, Seok’s wife and second son arrived at the hospital from Oman yesterday afternoon to visit the captain, who was still unconscious.

His son, Hyun-su, was comparatively calm, saying that the doctors had told him that his father was “fighting harder with willpower greater than most.”

Seok’s parents, who have their own medical problems, have been praying for their son from afar in Seok’s hometown of Miryang, South Gyeongsang, where 40 of the 60 households have families with the surname Seok. Banners encouraging the captain’s recovery have been hung all over town.

“I am frustrated because I don’t know anything else other than what the television news has been telling me,” said Seok’s father, Seok Rok-sik, 83. “I want to meet my son immediately ... but I am a patient with high blood pressure and inner organ problems so I can’t go that easily.”

Seok’s mother, Sohn Yang-ja, 79, has been suffering from Parkinson’s disease for three years.

“I cannot sleep at night for fear of something happening to my son,” she said, dabbing her damp eyes. “How much he must be hurting. I think I would feel a little better if I were able to see my son, well and alive, even once.”