Pirates fly into Busan in private jet from U.A.E.

Pirates fly into Busan in private jet from U.A.E. 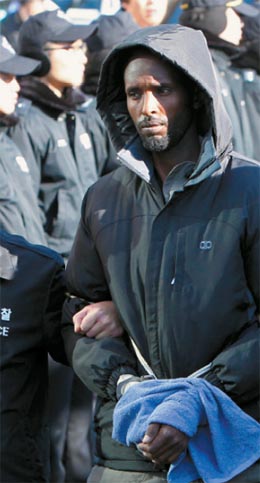 One of the five Somali pirates captured during the rescue of the Samho Jewelery arrive yesterday at the Korea Coast Guard’s South Regional Headquarters in Busan. [NEWSIS]

Five of the Somali pirates who hijacked the Samho Jewelry landed in Korea yesterday and the Busan District Court issued arrest warrants for the men in what is the Korean legal system’s first case involving Somali pirates.

The pirates arrived on a private royal jet lent by the United Arab Emirates and landed at Busan’s Gimhae Airport yesterday morning at 4:18 a.m. Officers from the Korea Coast Guard took them to their South Regional Headquarters, where they were briefly questioned. Warrants were issued by the regional court yesterday at 10:50 a.m.

The regional Coast Guard has been placed in charge of the investigation because Samho Shipping and Seok Hae-gyun, the wounded captain, both originated from the Busan region.

The men, whose ages range from 19 to 23, are being charged with maritime theft and attempted murder for hijacking the Samho Jewelry, taking hostage its 21-man crew and shooting the captain of the ship, who is in grave condition.

“[The pirates] hold a variety of jobs - one of them is a fisherman and another a soldier,” said Judge Kim Ju-ho, who was in charge of issuing the warrants. “They seem to have divided their roles up to form a specialized pirate organization.”

Police investigators want to determine the leader of the group and find those responsible for shooting Captain Seok. In the rescue operations on Jan. 17 and 21, eight pirates were killed by the Korean military. “Some of the men insist they went on the [Samho Jewelry] after it was hijacked,” said a court official. “They are also blaming each other or on the eight dead pirates for the shooting of the captain.”

Investigators also plan to trace the group’s international investors to prevent further hijackings. According to international law, which places the pirates under Korean legal jurisdiction, the men can be charged under a special law that protects ships and other offshore structures, which could result in heavy sentences, including imprisonment for life or capital punishment.

“The pirate found to have shot Captain Seok, if found guilty of attempted murder, is likely to given life in prison,” said Kang Seong-gi, investigation-team chief at the South Regional Headquarters, yesterday.

However, the investigation is bound to have difficulties, including a language barrier. The police officials in charge of investigation are getting the pirates’ Somali translated into English, which is then translated again into Korean. In addition, the men do not have proper identification documents because Somalia doesn’t have a functioning government, which is making it hard for Korean police to verify their identities.

The jet that delivered them was made available after a personal phone call from Chun Yung-woo, senior secretary to the president for foreign affairs and national security, to a royal family in the United Arab Emirates asking for help. The government in Oman, where the Korean military rescuers brought the pirates and the crew of the ship, refused to get involved in the handling of the pirates.

The men, who were confined after medical examinations, have been given clothes and blankets and are under strict surveillance, said the officers in charge of the investigation. They like to eat “soup, curry and beef,” the officers said. If the pirates are Muslim, authorities will let them pray.