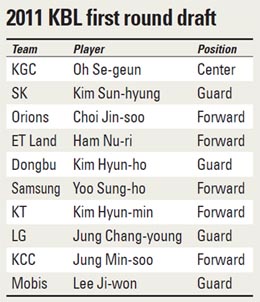 Oh is considered the most polished big man to enter the KBL since Kim Joo-sung was drafted first overall by the Dongbu Promy in 2002. Listed at two meters (6 feet, 6 inches) and 106 kilograms (234 pounds), Oh is capable of playing both center and power forward.

Oh has been a member of the national basketball team since his sophomore season in 2008 and led the Chung-Ang to a 25-0 record and a national title in his senior season last year.

The 24-year-old center also had a quadruple-double in points, assists, rebounds and blocks, in a game against Sangmyung University last September, becoming the first Korean collegiate player to achieve the feat.

KGC currently sits ninth in the 10-team league with an 11-25 record as of Monday, but boasts plenty of young talent on its roster, having selected Park Chan-hee and Lee Jung-hyun first and second overall in last year’s draft.

“I felt a lot of pressure coming into the draft,” Oh said in an interview yesterday. “I usually don’t get nervous easily but with everyone projecting me to go first overall, I lost some sleep yesterday.

“I always looked up to players like Kim Joo-sung, Hyun Joo-hyup and Seo Jang-hoon. It’s my goal to establish myself in the pros as a better player than the aforementioned players.”

Forward Choi Jin-soo, who played two seasons with the University of Maryland Terrapins, was selected third overall by the Daegu Orions. Choi has the distinction of being the first Korean to play NCAA Division I basketball but parted ways with the Terrapins in January 2010 after failing to keep up with his classes.

The offensively gifted forward will be coached by his estranged biological father and Orions head coach Kim Uyoo-tak. Choi’s parents divorced when he was an infant and he changed his last name from Kim to Choi in May of 2009 to acknowledge his stepfather.

“I’m not in game shape just yet but I’ll prepare for my professional debut one step at a time,” said Choi. “I don’t feel uncomfortable about playing for my father. I’m concerned that it might affect other players on the team but my priority is to perform my absolute best.”

A total of four half-Korean players were available this year but went undrafted.