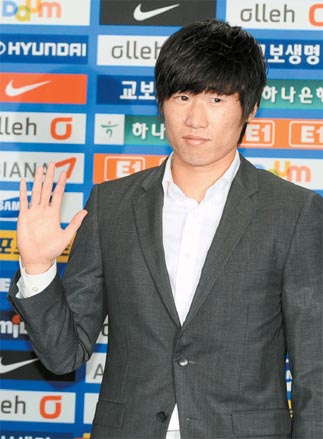 National team captain Park Ji-sung announced his retirement from international football at a press conference in Seoul yesterday, making final a decision that was expected for some time now.

Park, who made his debut with the national team on April 5, 2000, against Laos, ended his international career after his 100th international game in the 2011 Asian Cup semifinals against Japan, becoming only the eighth Korean player to reach the 100-game milestone. Park also played an integral role in three World Cup tournaments. Park was part of the 2002 Korea-Japan World Cup squad that made a surprise run to the final four and captained the 2010 World Cup team, advancing to the knockout stage on foreign soil for the first time.

“There are many young players who have made good progress,” he said. “They have proved themselves worthy as members of the national team. I need to step aside in order for such players to have increased opportunities. I felt that was the best decision for the national team.”

Since national team manager Cho Kwang-rae took charge of the squad last year, he has been busy infusing young talent in preparation for the 2014 Brazil World Cup. Players like Koo Ja-cheol, Lee Yong-rae and Son Heung-min played significant roles at the 2011 Asian Cup with Koo topping the tourney in goals scored with five.

With veteran left fullback Lee Young-pyo also announcing his retirement from the team at the end of the Asian Cup, Cho will continue to seek out young talent.

Included in the 22-man roster, released yesterday, for the Feb. 9 friendly against Turkey in Trabzon are first-time selections: Nam Tae-hee of Valenciennes FC, Hong Cheol of the Seongnam Ilhwa Chunma, and Yoon Suk-young of the Chunnam Dragons.

“I would have to say Son Heung-min and Kim Bo-kyung are suitable replacements for my position,” said Park when asked who he thought could replace him at left wing. “They have performed well.”

Park had two operations on his right knee in the past, and he missed the 2011 Asian Cup third-place match against Uzbekistan due to slight swelling in his knee. “If not for the injuries, I could have continued to play for the national team,” said Park.

He said at the press conference that he believed he had three to four years left in his professional career.