Pirouetting through life on a strict routine

Pirouetting through life on a strict routine 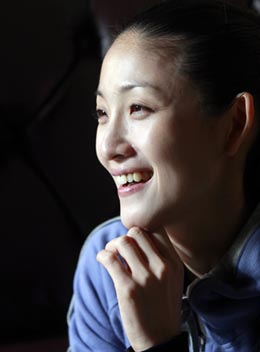 Kim Joo-won, one of Korea’s most celebrated ballerinas, wasn’t exactly in top condition on a recent weekday afternoon in January.

Each time she sat down or stood up, she groaned in pain. Blame it on a tender ankle, which she sprained earlier in the morning while practicing for the Paris Opera Ballet Company’s upcoming performance of “Giselle.”

Still, the principal ballerina of the Korea National Ballet continued to stretch rather than take a breather, constantly folding her slender body in half like a flip phone.

When asked if she would step outside the dance studio at the Seoul Arts Center’s Opera Theater - which is home to the state-run ballet company - to a cafe just a few steps away for an interview, Kim insisted on staying inside rather than venture out into the freezing temperatures. She also refused to take off her lavender-colored tracksuit so that a photographer could snap some shots of her in a black leotard, saying she needed to keep herself warm.

Some observers might view this as a sign of stubbornness. But it’s just as easy to see it as a reflection of Kim’s perfectionist spirit, which has helped fuel her to enormous success.

Kim, after all, is in high demand, performing about 120 times a year. Currently, she’s preparing for Giselle - which takes the stage from Feb. 24 to 27 - and her role as Juliet in “Romeo and Juliet,” to be held at the Spring Special Gala on March 1.

The 33-year-old ballerina has followed a strict, self-imposed routine for the past 23 years that includes up to eight hours of practice a day and the need for roughly 15 pairs of ballerina toe shoes each month.

“My father is someone who is not generous when it comes to compliments. But he says he respects me for having repeated the same daily routine ever since I started ballet,” she said. 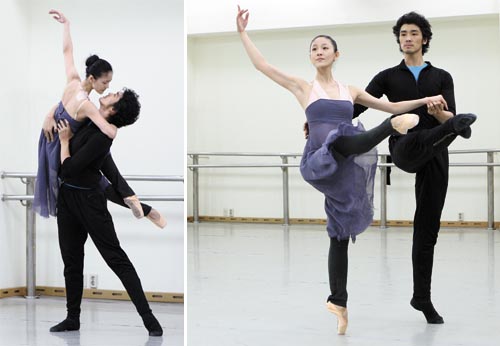 
The nation’s top ballerina has been praised for her ability to take on a wide spectrum of roles, from naive and innocent Giselle to the fiery-tempered heroine in “Carmen” to ambitious Aegina in “Spartacus.” Her unusually long and slim neck and arms allow her to present sophisticated, emotion-invoking moves - something that both critics and fans alike agree on - although these very physical features aggravate her chronic back pain.

Having debuted in Korea with a leading role in “Le Corsaire” in 1998, she has won numerous awards.

One of the highlights of her illustrious career was her 2006 performance in the Benois de la Danse, a ballet competition founded by the Moscow International Dance Association. Kim won the competition, making her the second Korean to accomplish that feat in the 20-year history of the competition after Kang Sue-jin of the Stuttgart Ballet Company. The competition is often characterized as the Oscars of ballet.

As a middle school student attending Sunwha Arts School, Kim decided to move to Russia to hone her talents, graduating from the prestigious Bolshoi Ballet School in 1997 and joining the Korea National Ballet the following year. Since then, she has racked up her fair share of accomplishments. But she recently found herself at the center of controversy as well after a seminude photo shoot for Vogue magazine.

Kim sat down with the Korea JoongAng Daily for an hour-long interview in the KNB’s staff lounge, where she talked about everything from her initial interest in ballet to her love life and the infamous Vogue photo shoot. The following are excerpts of the interview, edited for space and clarity.


Q. How are you doing preparing for the upcoming performance of Giselle?

A. This is the first time that I will dance in the French version of Giselle. I have realized that the more you know about the work, the more difficult it gets. It would be easy if it were merely about technique. But every single move of your fingertips and toes, and even the way you look at things, must be controlled. In the first act, you start with a naive 16-year-old girl, who later goes mad from the pain of love and eventually dies. In the second act, you must act like a weightless soul but tell so many stories at the same time. I am learning so much, and it is a great opportunity for me to add new dimensions to my performances.

You have done numerous collaborations with artists in various genres. You played a leading role, for instance, in the musical “Contact” a year ago and modeled for Korean photographer Park Il-yong’s exhibition entitled “Kim Joo-won: A Ballerina in the Heart of the City.”

Many dancers abroad do a wide range of artistic experiments that break convention, whereas the trend has yet to spread to Korea. Ever since early classical ballet was created, countless other types of ballet works have been born. The reason Russian ballet has fallen behind is because it shut down exchange with other countries. Artists are supposed to stay alert to the changing times. Collaborations give me enormous energy, which eventually helps me widen the scope of expression when dancing classical ballet. I also read a lot of books, listen to various types of music, watch many movies and visit art exhibitions for inspiration. That’s probably why I have consistently evolved in the past 15 years at the KNB.

What’s your most memorable collaboration?

Most recently I danced live to cellist Yang Sung-won’s solo performance. Both of us exchanged explosive energy and were deeply moved by each other. I still have so many things in mind to try in the future.

What led you to choose ballet as your specialty?

I have a total of four brothers and sisters, and since my parents were such art aficionados they invited various art tutors to our home and had us take classes together - from ballet and piano to flute, singing and even taekwondo. When other siblings of mine grew tired of ballet, I became even more attracted to it, and I have never become tired of it. I am grateful to my parents for allowing me to explore many career possibilities and decide on ballet.

Since you started ballet at age 12, has your perspective of it changed?

Until about five years ago, I constantly pushed myself to dance better. It was a struggle against myself. Now, it feels like I am dancing for real. I can see other dancers on the same stage, and I hear music from the orchestra. I am happier now.

In retrospect, how do you feel about your controversial Vogue photo shoot in 2007?

(Kim posed seminude for Vogue Korea’s October 2007 edition with her then-boyfriend Lee Jung-yoon, chief dancer of the National Dance Company of Korea. The six photos that ran were taken by veteran photographer Kim Yong-ho. The spread stirred debate over whether the photos were art or obscenity, and the story made headlines for days. The Korea National Ballet took disciplinary action by withholding her pay for one month, saying Kim violated her contract as a member of the troupe by not seeking prior approval for the shoot.)

There are some people who think photography is not art. But I think I was an object of art for the photographer. I wasn’t really emotionally affected by the incident. There are also a lot of ballet works with nude dancers.

You are still single. What are your thoughts about marriage?

I cannot date someone with marriage as a precondition. Having seen many married couples around me, I think marriage is something you are supposed to do when you are ready to sacrifice yourself. I have never thought about getting married, and I am not ready yet. What is more important is always being in love. And that does not necessarily mean a man. These days I love my nephews and nieces the most.

Do you feel a psychological burden from being the oldest in the troupe?

Strangely I have never felt that. I am stressed only when the specific movements or expressions I want to make don’t turn out. But I have never compared myself to other dancers. Ballet is about getting in touch with yourself. I have learned about death, love, jealousy, anger, loneliness and agony through ballet - even before I actually experienced these emotions.

Have you thought of retiring, given the physical demands of a sport that favors the young?

People around me are saying I have to prepare for what to do in the next five to 10 years, when I will have to step down. I won’t regret anything when I have to end my career as a ballerina. Art is something that matures as the artist gets older. Ironically, ballerinas are supposed to retire around age 40. But I don’t think that’s unfair, because ballerinas reach their artistic peak in their 20s and 30s. I think I will leave the stage when I can no longer perform the role of a 16-year-old girl or a fairy.