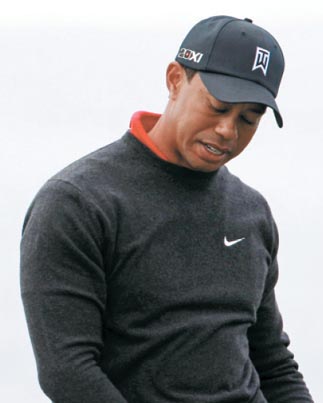 Tiger Woods reacts to another poor shot on the fourth hole at Torrey Pines during the final round of the Farmers Insurance Open in San Diego on Jan. 30. [AP/YONHAP]

Woods failed to birdie a par 5 for the second time this week and closed with a 3-over 75 on Sunday in the Farmers Insurance Open, ending his five-tournament winning streak at Torrey Pines with a middle-of-the-pack finish.

“I have some work to do,” Woods said. “There’s no doubt about that.”

The biggest surprise of his 74-75 on the South Course is that Woods had won seven times before, including the 2008 U.S. Open. He had never finished out of the top 10 in stroke play to start a season and in any PGA Tour event at Torrey Pines. This week, however, he looked liked anyone else.

Woods was out of the top 40 when he completed his final round, with the leaders just making the turn. And his worst result for a debut prior to this was two years ago in the Match Play Championship, where he lost in the second round and tied for 17th.

That was his first event after sitting out for eight months following reconstructive knee surgery.

Woods opened Sunday with two short irons inside 10 feet, missing both birdie putts. On the par-4 fourth, he nearly holed a long birdie attempt, then missed a short par putt.

“I hit it as pure as I could possibly hit it starting out, and got nothing out of it,” Woods said. “As the round went on, I progressively got worse with my golf swing. And ironically enough, felt better and better with the putter. So it’s one of those things.”

But those things never seem to happen to Woods at Torrey Pines.

He won the Buick Invitational four-straight times starting in 2005 and had never finished more than four shots out of the lead. But he was 13 out when he finished the Farmers Insurance Open, the kind of deficit he experienced so much of last year.

Much more was expected considering how Woods finished last year, putting together three of his best rounds at the Chevron World Challenge until blowing a four-shot lead on the final day and losing to U.S. Open champion Graeme McDowell in a playoff.

Woods also failed to post a low round - in four total rounds - among his group over the weekend. Anthony Kim was better the first two rounds, Jhonattan Vegas and Kevin Sutherland had better scores on Saturday, and PGA Tour rookie Brendan Steele shot a bogey-free 70 on Sunday.

How close is Woods to getting his form back?

He now returns home to the practice range for a week before playing in the Dubai Desert Classic, where he has won twice and has never finished out of the top five.