On welfare, DP debates whether to set new tax

On welfare, DP debates whether to set new tax 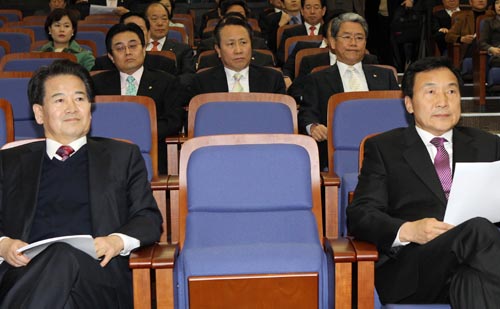 The Democratic Party’s former chairman, Chung Dong-young, left, and its incumbent chairman Sohn Hak-kyu sit in a conference room at the National Assembly yesterday as party lawmakers held a meeting about welfare policies and how they will be funded if implemented. [YONHAP]

Sohn Hak-kyu, chairman of the liberal party, announced Sunday that the DP will fund a series of expanded welfare programs without increasing or creating new taxes. In a meeting with reporters, Sohn also ruled out the possibility of issuing government bonds to fund its promises.

The Democratic Party has pledged free school lunches, free medical care for all, free child care and half-priced college tuition for low-income families. Sohn said the programs could be funded by pressuring the Lee Myung-bak administration to withdraw its planned tax cut for the rich and reallocating budgets on the four-rivers restoration project.

Other fiscal and tax reforms will allow the government to secure 20 trillion won ($17.84 billion) for the annual budget to fund the welfare programs, Sohn said, promising more benefits in employment and housing sectors.

The DP chairman’s announcement, however, quickly faced a challenge from a senior politician in his own party. Representative Chung Dong-young, a member of the DP’s Supreme Council, said yesterday that all major party policies must be decided with a vote from all Democrats, and he demanded a vote on his own proposal to introduce a new tax on the rich to finance the new welfare programs.

Chung was a former chairman of the party and its presidential candidate in 2007, when he was defeated by President Lee. Chung wants a new tax on the wealthiest Koreans who have net assets of more than 3 billion won, and said that could raise enough money to fund the DP’s welfare programs. He’s proposed a 1 percent tax on assets from 3 billion won to 5 billion won, and 2 percent on anything above that.

While many senior members of the DP worry that Chung’s plan will backfire, Chung said last week that more than 80 percent of the public supports his idea, quoting a newspaper survey.

“The Democratic Party should be more honest to the people,” Chung said. “It is uncomfortable to talk about taxes when talking about welfare, but we need courage to face the uncomfortable reality.”

Chung also said the decision on how to finance the welfare pledges is a matter directly linked to the party’s identity and platform, adding that the decision-making process needs to be democratic.

“The party’s constitution stipulates that party members have the right to participate in key decisions,” Chung said. “There should be a vote by all party members on the philosophy and blueprint of the Democratic Party’s welfare policy.”