Koreans in Egypt to be evacuated

Koreans in Egypt to be evacuated 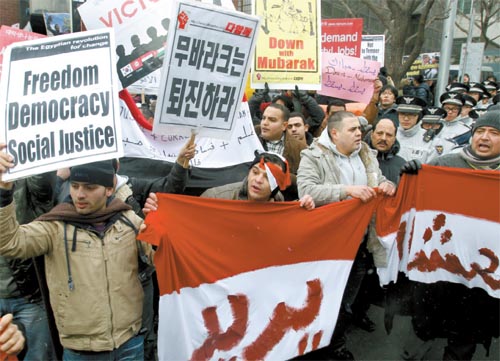 Egyptians living in Seoul stage a rally in front of the Egyptian Embassy in Hannam-dong, Seoul. They demand that President Hosni Mubarak step down. By Kim Tae-seong


The government yesterday said it was adding at least one special flight to Cairo to evacuate Koreans who are caught in the middle of anti-government protests in Egypt.

The move comes as Korean companies operating in Egypt have suspended operations and Korean employees and their families are fleeing the country. There are an estimated 1,000 Koreans living in Egypt.

Industry observers are worried that the unrest in Egypt could affect Korean exports to the Middle East if political turmoil spreads to the other countries in the region.

According to the Korea Trade-Investment Promotion Agency, there are 36 Korean companies operating in Egypt. The country is Korea’s fourth biggest export market in the Middle East after the United Arab Emirates, Iran and Saudi Arabia.

In addition, GS Engineering and Construction has signed a $2 billion plant construction contract with Egyptian Refining Corp. to build a hydro cracker, an annex to an existing oil refinery facility, 20 kilometers north of Cairo. GS said since the construction will start next year, there has been no direct impact from the current crisis.

Midas, a Korean polyester fabric producer located in the city of New Salhia, is considering temporarily suspending operations at its factory since 30 percent of its workers have failed to report to work, with 17 Korean employees working at the plant.

Dong-il Corp., a textile company, has a factory in Shubra El Kheima, north of Cairo, and it is still operating but it said it does not know how long the factory can continue to operate since protests are spreading in the country.

“Small and medium-sized exporters that have already produced goods for export to Egypt may suffer financial damage from suspended delivery,” said Kim Yong-seok, a manager at Kotra.

“We market mobile phones, televisions and electronic goods in Egypt but the business there is very small compared to other big countries,” said an official from Samsung Electronics. “It is now difficult to conduct business since the local banks are closed and financial transactions are nearly impossible,” with Samsung’s Korean employees now leaving the country. 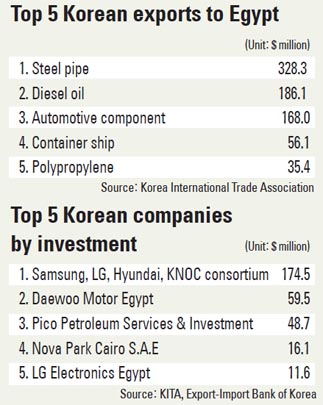 Hyundai Motor Group has advised 12 of its employees working in Cairo and 31 family members to leave the country for Dubai.

“Our business in Cairo isn’t that big and we haven’t been directly damaged so far, but we are still keeping an eye on the situation as to whether or not to come up with new measures in case the situation is prolonged.”

The new flight to be arranged by the government would be in addition to the three weekly flights now operated by Korean Air between the Egyptian capital and Incheon International Airport.

The foreign ministry believes that some 900 Koreans remain in Egypt and it was concerned that regular commercial flight services by Korean Air were not sufficient to evacuate all Koreans still there.

The government said that the extra flight will be added on Wednesday to Korean Air’s regularly scheduled flights from Cairo to Incheon on Tuesday, Thursday and Sunday.

The scheduled flights can carry 280 passengers, but capacity may be increased to 296 passengers and will fly directly to Seoul without stopping in Tashkent, Uzbekistan, said a Foreign Ministry official.

“In order to transport more people, we are considering various measures, such as using larger aircraft or asking for the understanding of Seoul-bound passengers in Tashkent to give up their seats to those coming from Cairo,” the official said.

“Travelers have nowhere to go. Some are staying in their hotels, but others have decided to wait at the airport instead in case they aren’t able to board a plane,” a Foreign Ministry official told Yonhap News Agency. “The embassy has been sending its staff to provide food and drinks.”

On Sunday, Korean Air announced changes to its flight schedule in order to avoid the government-imposed curfew that starts at 3 p.m. Its flights are now arriving in Cairo in the morning instead of at 9:45 p.m.

Staff at the Korean Embassy in Cairo are working around the clock on an emergency rotation plan and providing all possible assistance to Korean nationals there, the Foreign Ministry. No Korean casualties have so far been reported, although more than a thousand Egyptians have been killed or wounded in the protests.

On Saturday, the Foreign Ministry raised its security alert level for travelers to Egypt from the lowest level to the second-lowest out of the four-stage warning system. It urged Koreans to stay indoors and avoid traveling, while advising them to leave. But the government has not yet imposed a travel ban to Egypt, although officials are watching the situation closely.