Korea may stand out at Asian Games

Korea may stand out at Asian Games 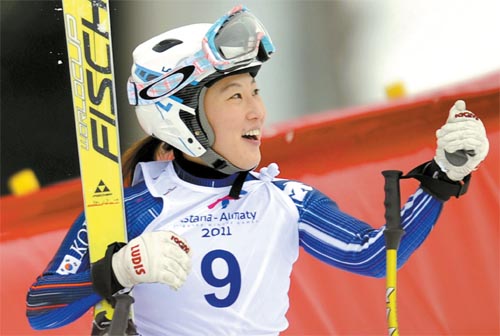 
There will be no shortage of sporting events to watch during the Lunar New Year, as Korea will look to come up big in short-track and long-track speed skating events at the 2011 Winter Asian Games this week.

Korea’s short-track speed skating team has traditionally been one of the world’s best but the emergence of young long-track speed skaters like Lee Seung-hoon, Mo Tae-bum and Lee Sang-hwa helped Korea to its best-ever sixth-place finish in the medal count at the Vancouver Winter Olympics last year.

Korea got off to an impressive start on the opening day of competition at the 2011 Winter Asian Games on Monday, earning five gold medals - three of them from short-track and long-track speed skating.

Kim Sun-joo, who had placed first in the women’s alpine downhill event on opening day, earned another gold in the super-G event yesterday.

In the men’s 500-meter short track, Lee Ho-suk fell in the final lap of the four-lap race to fall out of contention, while Cho Ha-ri placed fourth in the women’s 500-meter event. Today is the final day for short-track speed skating and Cho will be gunning for her second gold medal, along with teammate Park Seung-hi, in the women’s 1,000 meter.

In the men’s short-track 1,000-meter event, Um Cheon-ho and Sung Si-bak are favored to compete for first.

The short-track speed skating national team will depart soon after for Moscow to participate in the ISU World Cup from Feb. 11-13.

“Once we finish competing in Moscow, we will have to compete in another World Cup event in Dresden, Germany,” said Sung. “We will make our return to Korea on Feb. 22.” 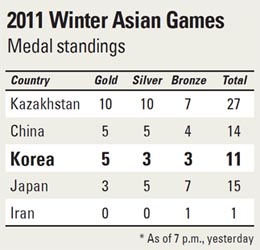 2010 Vancouver Winter Games gold medalist Lee Seung-hoon - who placed first in the 5,000-meter speed skating event on Monday - will compete tomorrow in the men’s 35 laps Mass Start, a new event at the 2011 Winter Asian Games. The women’s event will have 25 laps around the oval rink.

“Last year, we spent the Lunar New Year in Vancouver, Canada and we will be spending this year in Kazakhstan,” said Lee Seung-hoon. “It’s no big deal for athletes to spend the Lunar New Year abroad. If we managed to net good results, it will be a rewarding experience for the athletes and their families.”

Other notable events include men’s and women’s figure skating, featuring Kim Min-seok in the men’s event and Kwak Min-jung in the women’s event.