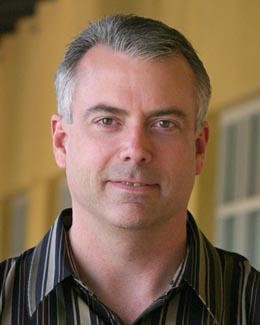 There were several buzzwords in the tech industry last year, and undoubtedly 3-D was one of them. Although industry observers predict that its fame could be short-lived, it appears 3-D isn’t ready to disappear given its prominent presence at the recent Consumer Electronics Show in Las Vegas last month.

In theaters as well, 3-D is attracting large audiences, especially to animated films like Megamind, a comedy-action flick featuring Will Ferrell, Brad Pitt and Tina Fey. The movie is produced by DreamWorks Animation, which has a state-of-the-art campus in Glendale, Calif. Now, all of DreamWorks Animation’s feature films are produced in 3-D.

DreamWorks Animation also enjoys a special relationship with Samsung Electronics, with the two companies forming a global strategic alliance a year ago for 3-D home entertainment. Under the deal, DreamWorks provides the content and Samsung provides the necessary technology.

The Korea JoongAng Daily conducted an e-mail interview with Jim Mainard, head of production development at DreamWorks Animation, on the present and future of 3-D. Mainard has played a crucial role in DreamWorks’ transition to 3-D filmmaking.


Q. How did you become involved in 3-D filmmaking at DreamWorks?

A. I left my previous role heading up the research and development team at DreamWorks and partnered with producer Jason Clark to recast all aspects of the studio in terms of 3-D. The effort involved writing new tools, revising existing tools, changing production work flows and data flows, as well as putting in place an extensive training program within the studio.

Tell us about your current job at DreamWorks.

My job is to focus on new revenue opportunities and look at how to capitalize on newly forming trends that make an impact on our business. Many of these trends are related to how customers now consume media, or more precisely, how they want to consume media. 3-D entering the home market was a huge challenge, but we are off to a good start in seeding a market for the future. Consumers today can see amazing 3-D at home in movie form. This will become the expectation of generations to follow.

You entered the entertainment industry after spending 13 years in the aerospace industry. What made you make that shift?

While in aerospace, I was lucky enough to stay on cutting-edge projects that provided me with the opportunity to learn a great deal about computer graphics, imaging and large-scale software development. Working on the Hubble Space Telescope project was among the highlights that I most enjoyed. In fact, I came to DreamWorks more out of curiosity. In my nature, I like to solve problems, and like aerospace, movie-making is a problem-rich environment.

DreamWorks uses products from Samsung Electronics. Why did you choose Samsung?

As you know, 3-D in the theater is well on its way to becoming a standard way to view content. While not all movies today are made in 3-D, I truly believe we are not far from it being the norm. So seeing the future, it was natural that we begin to figure out just how to make the 3-D home experience great. Samsung is the predominant TV manufacturer worldwide with a commanding lead over all other competitors in virtually every area that counts. So when we look for a partner to establish a 3-D home market, Samsung was the obvious choice. From a professional perspective there are improvements we would like to see. The glasses from all the consumer electronics firms are still a work in progress. While they work, the lighter and more comfortable you make them, the better they will be for consumers.

Some say that the 3-D boom, which began with Avatar in late 2009, will be short-lived. For 3-D films to grow and survive, what kind of changes do you think are necessary?

It had been said that color would ruin film-making, when black and white was the standard. Today, few movies are watched in 3-D, and very few consumers would say that color ruined modern film making. I believe there is still much to learn about 3-D filmmaking for each genre, and as such, film makers today have a very rare opportunity to rewrite the filmmaking rules.

Consumers are very smart. They already know the difference between good and bad 3-D. They are voting with their wallets. What is needed is discipline within studios to make more and better quality 3-D films so demand stays high. A commitment to training existing talent as well as in film schools is essential. Consumer electronics companies are well on their way to perfecting 3-D and now it is up to the filmmakers to deliver compelling and well-considered 3-D content.

What’s your view on 3-D televisions? There are skeptics that say people may want 3-D experience in theaters but not necessarily in their living rooms.

The most compelling argument I’ve heard for 3-D to fail in the home is that the glasses don’t work as well in that environment. People don’t just sit still for 2 hours at a time, they get up, answer the phone, get food from the kitchen, etc.

I think this is true, but bear in mind that most of us also have a way to pause our content (even live with DVRs), so it becomes less of an issue. Getting rid of the glasses will solve this problem, but I think the experience today is already so compelling that glasses are not a deterrent.

I know some in the industry say that a 3-D TV is still for early adopters, but when you look at the price and the incredible quality you get, I think it is very difficult to make that case. If you buy a TV today, you should very strongly consider the 3-D capable version, especially when you think about owning it for five or more years. Only 18 months ago we didn’t even have a Blu-ray standard and now you have hundreds of titles. The biggest titles will all be in 3-D by the time that TV you buy today is ready for replacement.