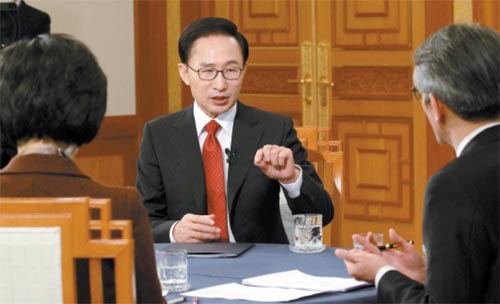 President Lee Myung-bak speaks in a 90-minute interview that was aired live yesterday on the eve of the Lunar New Year holiday. [Joint Press Corps]


President Lee Myung-bak yesterday expanded on his desire for constitutional amendments, proposing not only a change in the current presidential system but also broader modifications, including on inter-Korean issues, stressing that a Constitution suitable for the “digital, smart era” was necessary.

In a 90-minute television appearance in the morning, Lee discussed domestic and foreign affairs with two interviewers. The talk show was aired live on the eve of the Lunar New Year holidays.

Lee devoted a significant amount of time at the beginning of the discussion to the constitutional issue, dismissing criticism that his presidency was running out of time to achieve reforms. “I made my first proposal in the Aug. 15 [Liberation Day address],” Lee said. “Former President Roh Moo-hyun made his [constitutional] proposal seven months before his term ended, so it was a bit too late, and the matter was handed over to the next president.”

Referring to a 2007 agreement among heads of the ruling and opposition parties at the end of Roh’s term to amend the Constitution, Lee said the basic steps to make amendments had already been researched and readied by lawmakers and experts. In January 2007, Roh proposed a constitutional amendment to reform the presidency, and heads of six political parties agreed in April that the proposal would be made at the beginning of the National Assembly’s next term.

The current legislature’s term began in May 2008 and a study group was formed inside the National Assembly in July. The group, however, has made little progress.

“I don’t think the amendment is difficult if the ruling and opposition parties work together,” Lee said. “I don’t think it’s too late. I think the timing is appropriate.”

While elaborating on the need to amend the Constitution, Lee said he wouldn’t lead the initiative but wanted the National Assembly to do so. He stressed that the issue must not be used as a political tool.

“Before saying whether it’s feasible or not, this is something that must be done to reflect the changes in our times,” Lee said.

Previously, the Lee administration had proposed amendments that ended the single-term five-year presidency to allow re-election, which he said would calm bitter partisan battles. It also proposed a power-sharing arrangement between the president and the prime minister.

Yesterday, he said the amendments should also include changes to the election system to end the regionalism in Korea’s politics and to update the century-old administrative regions.

Lee stressed that he had no political motives, such as influencing the next presidential election, in pushing for constitutional changes. “There should be no advantage and disadvantage,” Lee said. “If there are such factors, they should be eliminated.”

Asked about a possible summit with opposition leaders to end the deadlock on the issue, the president said, “We should meet.”

The main opposition Democratic Party played down the significance of the interview. “It was hard to see any sincerity,” said Cha Young, DP spokeswoman.

She also made clear the DP’s rejection of Lee’s initiative to amend the Constitution. “He finally revealed his intentions to disarm the prominent presidential candidate of the ruling party,” referring to former GNP Chairwoman Park Geun-hye, “and to cover up his maladministration with a constitutional amendment,” Cha said. “That’s why it is unacceptable.”

The DP, however, said it was willing to consider Lee’s proposal to sit down for a summit.

In the interview, Lee also reaffirmed his hard-line North Korean policy, urging the North to end its military brinkmanship. “The North must change. Only then will the six-party nuclear disarmament talks and inter-Korean dialogue see some progress.”

Lee also said he was willing to have an inter-Korean summit if necessary, urging the North to make up its mind on the issue. “If the North really shows an attitude of genuine dialogue, we can have inter-Korean talks, economic exchanges and six-party talks.”

Lee said his administration won’t accept the North’s military attacks, but said the North is now facing a good time to change, and he urged Pyongyang to seize the opportunity. The two Koreas are working on scheduling military talks for this month.