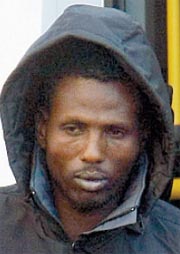 The Busan Coast Guard thinks Somali pirate Arai Mahomed was responsible for the gunshots that put Samho Jewelry Capt. Seok Hae-gyun in critical condition, but Mahomed has vehemently denied it.

And the detained pirates are already praising Korea’s legal system, its food and even the prison bedding.

Coast Guard officials have started their interrogation of the five captured pirates in earnest, and the pirates answered questions until 11:30 p.m. Monday, said a Busan Coast Guard official. The officials now have personal information on the rest of the 13 pirates who hijacked the Samho Jewelry, eight of whom were killed in the two military assaults that rescued the crew and ship.

The leader, Abdi Risqe Shakh, 28, and his right-hand man, Suti Ali Harut, 29, were both killed, according to the pirates’ testimonies. It wasn’t clear whether they were killed in the first assault on Jan. 17 or the final one on Jan. 21.

Of the 13 pirates, 10 were from the Puntland region in northeastern Somalia, according to the Coast Guard.

“The special investigative team will request the National Forensic Service to appraise the four bullets found in Captain Seok’s body and determine which gun the bullets came from, and who shot Seok from the fingerprints on the guns,” said the Coast Guard official. 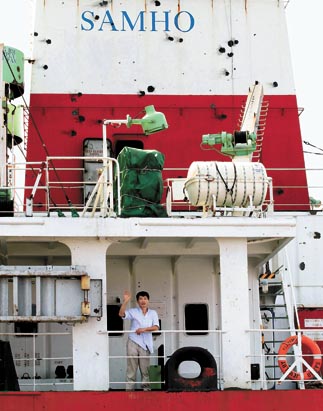 A Korean sailor on the Samho Jewelry waves to reporters on Monday in the port of Muscat, Oman. [YONHAP]

The investigators have come to the conclusion that Mahomed shot Seok during the final assault.

“[Mahomed] is stubbornly denying the charges, saying he never laid hands on a gun,” said the Coast Guard official. Mahomed briefly admitted he shot the captain on Sunday, and then changed his testimony when another pirate identified him as the shooter.

Mahomed was taken to the hospital on Monday after complaining of an injury on the back of his hand. After being treated, he was returned for questioning with his hand bandaged to keep down swelling, the investigative team said. The team said they would cross-examine Mahomed and the pirate who accused him of shooting Seok. Officials will also be bringing in the Korean sailors who were on the Samho Jewelry for questioning. They are expected to arrive today at 9:05 a.m. at Busan’s Gimhae International Airport. Five Korean officials sent to Oman to investigate will question the ship’s foreign crew - two Indonesians and 11 Burmese.

The officials are still looking into whether the pirates intentionally targeted Korean vessels after the Samho Dream was ransomed for a record-breaking $9.5 million last year.

Meanwhile, one of the pirates remarked on his first day in Korea, according to the Coast Guard, “Somalia has severe internal conflict and security is awful, but I think Korea’s legal system is well-established. It’s impressive that our safety is cared for and even our human rights.” Another pirate said while behind bars, “Korean food is better than I thought. The bed isn’t so bad either. I think Korea is a good country.”